Chris Palfrey, Accomplished Member Of The Half Century Club 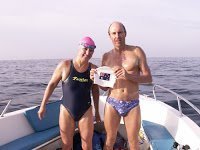 Since turning the age of 50, Chris Palfrey of Townsville in Queensland, Australia has become an accomplished and prolific member of the Half Century Club, a special group of individuals – marathon swimmers over the age of 50 who have conquered channels around the world. Chris is proving to thrive in the Fountain of Youth that world’s oceans offer and prove that some things do get better with age.

Over the course of his entire career, he has completed three Manhattan Island Marathon Swim, nine Rottnest Channel Swims, was part of the 33-hour Lake Taupo triple-crossing record relay and has assisted his wife Penny on several of her own marathon swims as well as done many shorter ocean swims.

And 2011 will continue to be no less active.