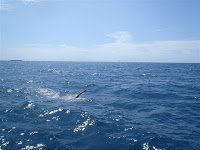 Chris Palfrey completed the treacherous Green Island swim where he became the second man to face down sharks, crocodiles and the chironex fleckeri jellyfish, the most venomous creatures on earth between Green Island and Cairns in Queensland, Australia.

Chris broke the 1977 record of Eddie Lovelock with a time of 7 hours 54 minutes and 53 minutes. 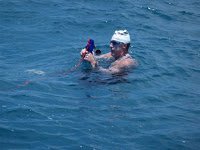 “My swim was good. When I left Green Island, an atoll that forms part of the Great Barrier Reef, I swam over lots of coral and saw five turtles in as many minutes.

I had a headwind for first 90 minutes which was uncomfortable, but after that, it was not bad. I had lots of tiny irritating stings for last two hours of swim, but nothing bad.”