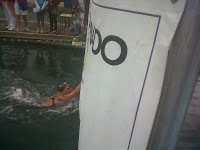 With a cool drizzle pouring down on the 3-loop course, Christian Reichert was motivated to pick up the pace early. With a powerful 74 stroke-per-minute stroke, he pushed onwards to the finish clearly the class of the field.

The field was skewed young and included many members of the Spain Junior National Open Water Swimming Team, including swimmers from Argentina, Sweden, Portugal, Great Britain and the USA.

So was the eventual women’s winner Anna Olasz of Hungary (shown finishing above). “I got cold when we started slowly. But the race got better when we started to go faster. I swam here at the European Junior Open Water Swimming Championships last year. I really like it here.” Winning has a tendency to do that. The 18-year-old Olasz sprinted to a 5-second victory over fast-closing Laia Tena Quintilla of Spain in 1:06:33. The athletes have a short turnaround as the 55th annual Descenso a Nado de la Ría de Navia is tomorrow. With rain and cold forecast, the pace should be fairly quick from the beginning.

And some veterans of the race remember those colder swims. Primitivo Suescum, a 66-year-old Basque swimmer from Pamplona, Spain has swum in the Descenso a Nado de la Ría de Navia since 1965. “The 49th edition is very clear in my mind. It was very, very cold water about 14 degrees. I usually swim the Descenso in about 1 hour, but that year, the swim down the River Navia took me 1 hour 20 minutes.”