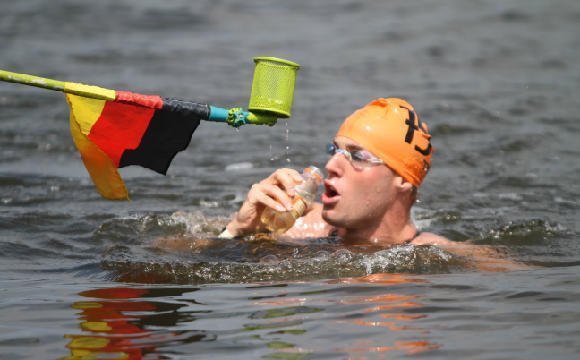 In order to qualify to compete as a swimmer at the 2013 FINA World Swimming Championships in Barcelona, Spain this coming July, each country has their own specific qualification standards for the 5 km solo, 10 km solo, 25 km solo and 5 km Team Pursuit races.

To order to select the two German members who will compete at the world championships, the coaches combine the finishes at both the Eilat and Cancun races. Instead of domestic competitions where they only face their fellow German swimmers racing in smaller lead packs on familiar shores, the Germans prefer to select a team that closely replicates what will happen at the world championships: large packs, top international swimmers and the highest-placed swimmers qualify.

And it was clear that Christian Reichert was ready to rev it up at the first stage in Eilat where he upset his training partner and 2-time Olympic medalist Thomas Lurz in the 30-man field at the FINA 10km Marathon Swimming World Cup race. “I was well prepared for Eilat,” recalls Reichert. “In the beginning of the race, I tried to relax and swim easy in order to save energy. After approximately 5 km, I tried to position myself in the Top 8. As we started in the final lap, I took the lead and was able to keep it until the finish.” Well it was easier said than done in the field that includes world champions and several Olympians.

“Of course, I was really surprised that I won the race. Over the last meters towards the finish, I just focused on swimming as fast as possible. I didn’t realize what was happening around me. That’s why I was even more astonished when I found out that I was 5 seconds ahead of the next swimmer and 9 seconds in front of the third place.” But with one good race down, his goal of representing Germany is still not confirmed. “I’m just extremely happy that I won my first World Cup, but now I will work even harder in training because I want to do another good race in Cancun and qualify for the World Championships.”

Not only did Reichert upset Lurz, but also up-and-comers Rob Muffels and Soren Meissner to lead a powerful quartet of Germans.