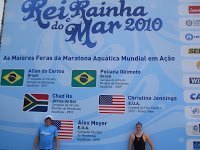 Christine Jennings explained her victory over her Brazilian Olympian rival Poliana Okimoto at the Queen of the Sea (Rainha do Mar) competition on Copacabana Beach in Rio de Janeiro in front of a television audience. Christine will have the pole position at tomorrow’s 7K Queen of the Sea.

The results were as follows:

Christine Jennings is shown with Chad Ho in front of the massive promotional signage that showcases the Queen and King of the Sea competition on Copacabana Beach.