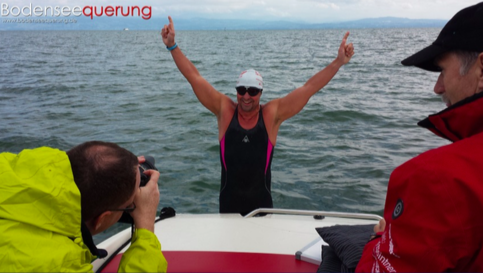 Christof “Wandi” Wandratsch has succeeded in every niche of the open water world, from the English Channel to ice swimming.

After setting the record for a lengthwise crossing of the Bodensee, a 66 km swim completed in 20 hours 41 minutes in July 2013, Wandratsch attempted to set the widthwise crossing record this weekend under the direction of his coach Stefan Hetzer.

Not surprisingly, he succeeded.

In 2 hours 28 minutes in a 12 km straight line course from Romanshorn to Friedrichshafen, he shattered the old record held by Nathalie Pohl in 2 hours 50 minutes.
WoW-style’s Oliver Halder said after the finish as the clock struck 5 pm on June 21st, “There were no problems during the swim. Everything went smoothly and we set off on an optimal course.”

Record-keeping across the Bodensee is maintained by  Bodenseequerung: