Christopher Guesdon Thank You At The Hall Of Fame 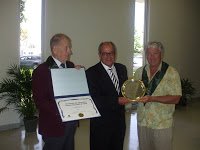 Christopher Guesdon was the recipient of the 2010 Irving Davids / Captain Roger W. Wheeler Memorial Award at the International Marathon Swimming Hall of Fame induction ceremony this year. As the individual credited with creating the modern format of the Olympic 10K Marathon Swim, Chris visited dozens of countries where he promoted or officiated hundreds of sanctioned races.

At his induction speech, Chris said, “I want to say thank everybody who in these past months and over the years have helped, guided and given me so much. I am truly, truly grateful and terrible happy. Special mention must be given to Roger Smith, Sid Cassidy and Dennis Miller.”

“When you grow up in the suburbs of Melbourne or Sydney or in Hobart Tasmania with a love of open water, a dream like this [being inducted in the Hall of Fame] seems vaguely ludicrous and completely unattainable. But this moment is directly connected to those childhood imaginings and for anyone who is on the downside of advantage and relying purely on courage, it is possible.”

“I dedicate this award to someone who took the journey with me, my friend and colleague, Dick Campion.”

Photo shows Chris with Dale Petranech on left and Sid Cassidy on right at the International Swimming Hall of Fame.