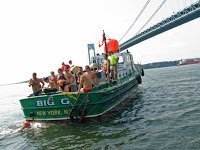 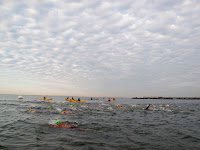 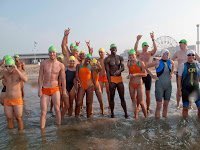 CIBBOWS also offers a Swim Buddy program where swimmers can find training partners or get started with one of their group swims via its CIBBOWS hotline.

Over its history, CIBBOWS has hosted regional and national open water swimming championship events for U.S. Masters Swimming. And its long-term goal is to build a beachfront facility that serves as a home for open water swimmers on the East Coast of the United States.

To kick off its 2012 summer season, CIBBOWS is hosting its first open water swim clinic together with its 2 Bridges Swim Under the Walkway (2.5 km and 5 km) this weekend on June 2nd.

Other races on its calendar include the longest competitive stage swim in the world, the 8 Bridges Hudson River Swim from June 27th to July 2nd, Grimaldo’s Mile on July 22nd, and the Aquarium Mile (1 mile, 5 km, 10 km) on September 8th.