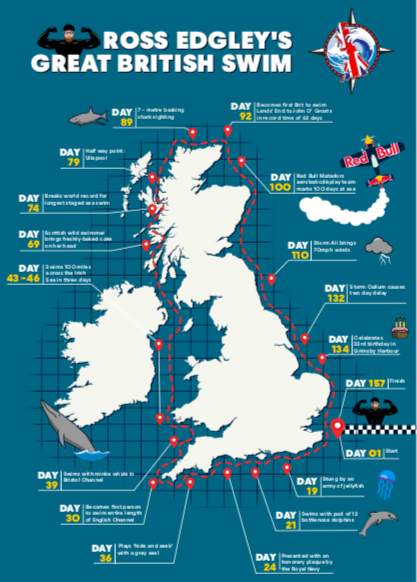 Ross Edgley swam nearly as far – 2,884 km around Great Britain on his assisted stage swim that started on June 1st and ended on Margate Beach on November 4th as the circled around the coastlines of England, Wales, Ireland and Scotland.

The distance that the 33-year-old swam over 157 days at sea – without stepping on land – equivalent to swimming across the English Channel 85 times. Along the way, he encountered a minke whale in the Bristol Channel, a 7-meter basking shark off the coast of north Scotland, pod of twelve dolphins off the Devon coast, a grey seal in Cornwall, 30 seals, a colony of puffins, 6 sea otters and 2 eagles and experienced 37 jellyfish stings. Ultimately, he decided to grow a beard in order to protect himself from the stings of the jellyfish.

On his last stage into Margate Beach, Edgley swam his final mile with 400 swimmers from the Outdoor Swimming Society where they were greeted by large crowds.

Starting on June 1st, the Great British Swim took Edgley 157 days over 5 months to return to where he started on his clockwise swim around mainland Great Britain.

Edgley described his effort, “Setting out, I knew the Great British Swim would be the hardest thing I’ve ever attempted. I can’t really believe we’ve done it. I was very naïve at the start of the whole thing, and there were moments where I really did begin to question myself. My feelings now are pride, tiredness and relief.

It’s been a team effort and it’s thanks to the whole crew, the support I’ve received from the public and Red Bull that I’ve been able to complete it. To see so many smiling faces here today is amazing, and if I can take one thing away from this whole experience, it’s that I’ve inspired people to go out there and challenge themselves, no matter how small that inspiration may be
.”

Edgley swam in 6-hour stints, sometimes at night and mostly in the daylight hours while resting in between to rest and recover aboard his escort boat Hecate skippered by Matt Knight who said, “I’m tremendously proud of Ross for completing the Great British Swim. When he first approached me and said he wanted to swim around Britain, I think I was one of the only people who took him seriously. I knew the challenge was possible, but it would take a very special person to complete it. Someone able to endure everything mother nature could conjure up.

Britain is beautiful. Especially when you have the pleasure to look upon the coast from the sea. My memories of the Great British Swim will last forever. My family have been part of the crew with my wife, two daughters and my son on the boat throughout the challenge. It has brought us closer together and Ross has become a lifelong friend to us
.”

Along the way, Edgley described his nutrition plan: between 10,000 and 15,000 calories each day including 314 cans of Red Bull and 610 bananas, and lots of porridge oats, rice pudding, noodles, pizza and pasta as well as coconut oil and nut butters for fats, and green shakes and multivitamins for micronutrients.

Edgley explained, “During the day swims, my body’s biological clock knows it needs to be awake. However at night, my body is naturally more tired, so before night swims I’ll drink one or maybe one and a half cans of Red Bull, usually with some porridge oats.

One reason is that caffeine has been shown to improve the ionic environment within working muscles. What I mean by that is that it spares muscle glycogen, so I’ve been having Red Bull with porridge oats because the porridge provides glycogen, which is stored for later in the day, and the Red Bull mobilises your body to use its own body fat for fuel.

During his 23 weeks at sea, he faced the extreme winds and waves caused by Storm Callum and Storm Ali that caused safety stoppages, a badly swollen and disintegrating tongue caused by long exposure to seawater, and extreme wetsuit chaffing.

On August 30th, Edgley became the first Briton to swim 1,448 km from Land’s End to John O’Groats in 62 days – less than half the record set by Zimbabwean Sean Conway, who completed the swim in 135 days in 2013.

Like Conway, Edgley was nominated for the World Open Water Swimming Performance of the Year [see here].

Prior to setting off on an unprecedented swim around Great Britain, Edgley started his aquatic career as a water polo player for Great Britain and later graduated from Loughborough University School of Sport and Exercise Science with a 1st class honours for his dissertation on the different strength and power adaptations to various training protocols. He authored The World’s Fittest Book that became a bestseller in the UK.

Over the past few years, he has also completed a marathon run while pulling a MINI Cooper, climbed a rope to the equivalent height of Mount Everest (8,848m) in 24 hours, and completed a Tree-athlon which involved an Olympic-length triathlon while hauling a 45 kg log on his back.

To meet and listen to Ross Edgley about Great British Swim on November 10th at The Olympic Club in San Francisco, register for the Open Water Summit and WOWSA Awards here.