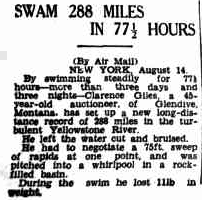 Clarence Giles was a 45-year-old livestock auctioneer who completed the longest distance covered in a continuous open water swim way back in 1939.

He traversed 463.5 km (288 miles) from Billings to Glendive in the state of Montana swimming, floating, and navigating his way down the Yellowstone River in 77 hours 30 minutes.* Reportedly, 4,000 spectators saw him finished his event at 6 pm after starting at 12:30 pm three days before.

Friends were waiting for him with a stretcher and an ambulance, but he shocked the spectators by walking to his car. “I feel very good except for the bruises,” he said through parched and bleeding lips.

“The toughest part of the swim was a surprise to me, just above the Buffalo rapids where the water pitched downward sharply for 75 feet. There was a whirlpool at the bottom and I got caught in it and smacked around pretty hard before I could work my way out,” explained Giles to the Lawrence Journal-World in 1939. He hit all kinds of wood and boulders as he swam and drifted at a pace of 3.6 miles per hour.

He stopped only once, interestingly adhering to the not-quite-then-established rules of two-way channel swimmers when he stopped for only 10 minutes en route while his escort car was stalled. The car was used by his wife and daughter to supply him food along the course.