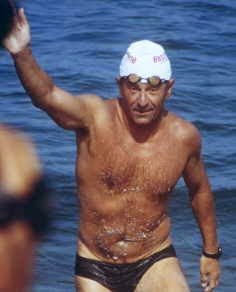 When Claudio Plit was informed that he was being inducted as an Honor Open Water Swimmer in the International Swimming Hall of Fame, the Argentinian understood the extent of a great honour to receive such a rare recognition.

Plit recalls his lengthy career as a professional swimmer, “I must say that swimming open water was a marvelous and magical experience for me from the Paraná River in Argentinato the Nile River in Egypt, from the Atlantic Ocean of Mar del Plata where I now live to the English Channel. I crossed the Lac Saint Jean in Canada 26 times, making it almost my second home. Close on its heels were the 20 times that I swam Around the Island in Atlantic City in the United States.

The more swims I remembered, the more emotional I become.

I have great memories of friends and companions, past and present, from all around the world. They are all a part of my everyday existence. A rich taste of camaraderie with hundreds of situations of learning and understanding, fulfilling my curiosity and dreams to pursue my open water adventures.

Since open water became a way of life for many years, I feel that I receive more from it than I ever expected from swimming. I am thankful, indeed, to my chosen sport.

Today I share my work with my wife and two children at our own swimming pool. I feel that in a way, this is the fruit of my swimming career. I considered myself very lucky to have lived this life and feel extremely honoured to receive this award from the International Swimming Hall of Fame.”

After one of the longest and most successful career as a pro swimmer where he competed in over 250 pro races, Argentina’s Claudio Plit (born in 1954) is currently the race director of the FINA 10km Marathon Swimming World Cup in Viedma and the the Mar de Plata and Maratón Acuática Internacional Ciudad de Rosario, both in Argentina. Before his role as a race director, Plit competed in and won every major professional marathon swim around the world over a 30-year period.

During his peak between 1974 and 1985, he first or second nine times and finished in the top 3 in 45 professional marathon swims throughout North and South America, Europe and Africa. He has completed more than 250 marathon swims over 8 hours in duration including fourteen 57 km Maratón Acuática Internacional Santa Fe – Coronda winning four times in 1974, 1975, 1976 and 1977, the English Channel twice, and the Beltquerung. He swam in 17 Traversée internationale du lac Memphremagog from Vermont to Canada and competed in 15 Maratona del Golfo Capri-Napoli in Italy, winning 4 times.

He remains active as a coach and escorts swimmers participating on the FINA Open Water Swimming Grand Prix professional circuit and 25 swimmers who have crossed the English Channel. He has been a guest presenter at FINA open water seminars and was declared an Honorary Citizen of Roberval in Quebec, Canada and served as the president of the World Professional Marathon Swimming Federation from 1980-1982 and 1990.