Clearing The Water In Channel Swims 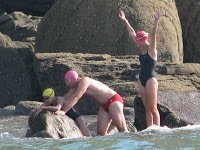 Ron Collins, founder of the 24-mile Tampa Bay Marathon Swim commented on our previous story on the Greatest Fears of Open Water Swimming.

Ron asked about the bottom and how many injuries are caused by open water swimmers cutting themselves on a sharp rock or on coral as they get in or out of the water?

He observed on how people fear events that have no – or little – chance of happening versus at common injury in the real world.

He has a point.

How many people have successfully completed the English Channel or the Catalina Channel – fighting currents, ocean swells and hypothermia hour after hour, occasionally surrounded by sharks and frequently stung by jellyfish, pushing themselves to the outer limits of human endurance in the water…only to safely arrive to the distant shore – and they get cut or hurt on the rocks at the very end of their swim?

We have seen cuts, bruises and, on one extreme occasion, broken ribs as the athlete was navigating between the rocks.

According to the English Channel governing body, the Channel Swimming and Piloting Federation, “For a swim to be officially recognised, the swimmer must walk into the sea from the shore of departure, swim across the English Channel (i) to finish on dry land, or (ii) to touch steep cliffs of the opposite coast with no sea-water beyond. Swimmers may finish in harbour water provided they land as in (i).”

According to the English Channel governing body, the Channel Swimming Association, “For a Swim to be officially recognised, the swimmer must enter the sea from the shore of departure, swim across the English Channel and finish on dry land, or touch steep cliffs of the opposite coast with no seawater beyond. Swimmers may finish in harbour water provided they land as noted above.”

According to the Gilbraltar Strait Swimming Association (Asociación Para El Cruce A Nado Del Estrecho De Gibraltar), “The crossing starts from the boat located at Tarifa Island and the swimmer must touch the rocks. The crossing will end at a natural point on the Morroccan coast or, in the case where that may be a difficult point to access by the boats, when the event is considered to have been sufficiently carried out, touching morrocan land or entering in a natural bay.” 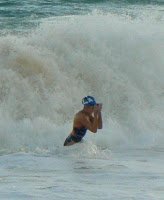 The Tsugaru Channel, the Cook Strait, swims in the Great Lakes of North America, the North (Irish) Channel, the Molokai Channel and other channels in the Hawaiian Islands follow the English Channel rules – whether the swimmers have to navigate around rocks, jetties, cliffs and/or large surf.

So for channel swimmers to successfully and safely achieve their goals, it is always best to “clear the water” with the same mindset of care onshore as is utilized between shores.