Cliff Lumsdon, An Open Water Luminary Up For A Vote 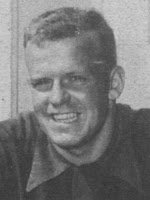 His track record is impressive:

1955 32-mile Canadian National Exhibition professional race: only finisher in field of 35 swimmers in 1955

1956: second crossing of the Strait of Juan de Fuca

Cliff was renown for his cold-water ability, once going 32 miles in 18+ hours in water temperatures ranging between 48 and 52°F (averaging 10°C) and going 11 hours 35 minutes across the Straits of Juan de Fuca between Washington State and Vancouver Island in Canada where water temperatures averaged 48°F (9°C). Cliff was the second person to cross the Strait of Juan de Fuca after Bert Thomas in 1955. In 1949, he won the Lou Marsh Trophy for the outstanding Canadian Athlete of the year. He was inducted into the Canadian Sports Hall of Fame in 1976 and the Ontario Aquatic Hall of Fame in 1993.

As a lasting memory of his legacy, the Cliff Lumsdon Award is presented for outstanding achievement in marathon swimming in the province of Ontario, Canada.