Clocks And Clouds In Swimming And Triathlons 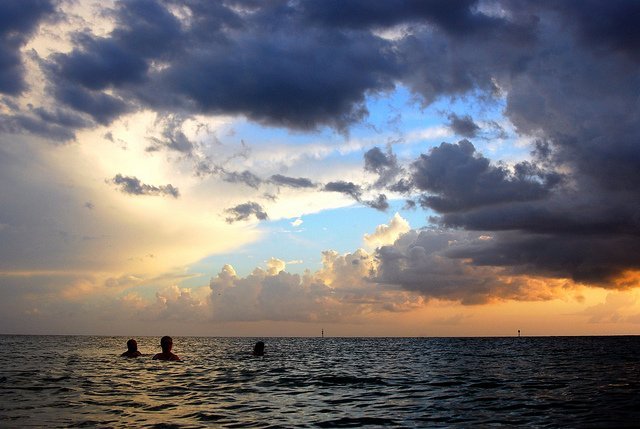 Pace clocks and stop watches that carefully measure time dominate training and competitions among pool swimmers around the world. Interval training, best times and qualification standards dictate the careers of pool swimmers. Waves, winds and water temperature are among the climatic elements that open water swimmers deal with in oceans, lakes and rivers. Swimming under bright sunny conditions or overcast gray skies, open water swimmers are affected constantly by dynamic environmental conditions. So when we think of the differences between pool swimming and open water swimming, we think of the differences between clocks and clouds. Similar to the rectangular uniformity of pool governed by controlled water temperatures and straight black lines and lane lines, clocks are neat, orderly mechanisms that are built to be repetitive over and over again. Pool swimmers are often fairly exact in their descriptions of their training or races, “The intervals were 1:10 per 100,” or “My time was 9:05 for the 800.” Clouds, on the other hand, are irregular, unpredictable, and never the same. They change from second to second, are multi-layered, and are as dynamic as the water below. Slightly different in their approach from pool swimmers, open water swimmers are often more descriptive of their swims and less concerned with time. “The conditions were rough with lots of cold spot,” or “It got really bumpy towards the end.” It is the triathletes who bridge the gap and meld both disciplines. They not only focus on the times they achieve of their swim legs like pool swimmers, but they also colorfully descriptive of their open water experience like their open water brethren. While many open water swimmers focus on the experience and conditions, and pool swimmers focus on their time, triathletes are often a combination of the two: “I did a 1:24.2 on my swim leg, 4th in my age group, 11 minutes behind the leader, about 38 seconds off my best, but I was able to negative split the swim by 45 seconds even if I dropped my gel pack and the course was choppy as can be with the wind. The currents pushed me laterally off-course as I got crushed around the turn buoys and missed that last wave coming into shore, but I came back after drafting off the secondary pack.” Clocks and clouds, pools and open water, both have their place in the swimming and triathlon communities. Copyright © 2008 – 2013 by World Open Water Swimming Association