Clone Crossing In The Cook Strait 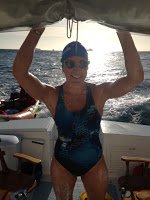 This past week, Kim Chambers swam the exact same route, starting on the South Island and finishing in the same spot on the North Island in her successful Cook Strait swim.

Incredibly, she also completed the tough crossing in the exact same time as Penny Palfrey did during her April 2006 crossing of the Cook Strait (8 hours 26 minutes).

What are the odds of that happening?

Given the conditions that both women faced, their comparative speed and the common thread in the persona of a coach named Philip Rush, it actually made a bit of sense.

The former ballet dancer from New Zealand who is now working in Silicon Valley with Adobe and swimming with the Night Train Swimmers will now turn her sights to joining a group of men who plan to swim at least one week straight in the Pacific Ocean from San Francisco to Los Angeles along the California coastline.