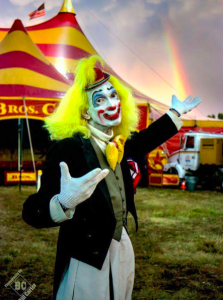 Courtesy of Bill Carter Photography, Cole Brothers Circus. Part of the fun that Dr. Tim Johnson, DPS, PE experienced as the author of the book, History of Open-Water Marathon Swimming, was uncovering swims that had taken place so long ago that they had been largely forgotten.  He explained, “When a swim was proposed or conceived, my research would include looking for historical records. I used the New York Times archives because its archives date back to 1851. But not everyone submits a swim outcome to the New York Times so I am certain to have missed some reports. Another consequence of a swim is when the members of an escort team meet years later for an anniversary of a swim. These events are never covered by newspapers.  It is only the International Swimming Hall of Fame or the International Marathon Swimming Hall of Fame that remind us of our heroes.” Dr. Johnson recalls one such reunion. “These are benefits of working with a team in that you can count on them to be there when you need them. Open water swimming is pursued by motivated swimmers, but they do not act alone as they possess traits of leadership. Some swimmers could be called ‘characters‘. Recently, a swimmer with his hair dyed yellow, appeared at the recent International Swimming Hall of Fame Honoree Induction Weekend in Ft. Lauderdale, Florida. He had come to pay homage to a swim coach, Jim Wood, who was being honored by the International Swimming Hall of Fame for his lifetime achievements and contributions to swimming. It was a sad occasion because Jim had died earlier this year. The swimmer proudly stated he was here because Jim Wood was his hero and had known him for many years. He came representing the swimmers and employees of the Berkeley Aquatic Club of New Providence, New Jersey, where in 1977, Jim had established with the 2004 Olympic Trials pool and aquatic center. Besides everything that Jim accomplished throughout his administrative career in swimming on the national and international stage, he had a dream to build and operate a pool for the local swimmers of New Jersey. I first heard from Drury Gallagher, the originator of the Manhattan Island Marathon Swim (MIMS), that Julius Carallo was coming. Drury was another of Julius’s heroes for having helped him to learn to swim. I hadn’t heard from him since 1983 when he had finished the Manhattan Island Marathon Swim successfully after his second attempt.  I had attended another event honoring Julius’s swimming accomplishment by the Italian American Historical Society in Brooklyn a month after the swim. Julius’s efforts to learn to swim marathons and other swimmers were chronicled in the 1983 article by Jennifer Levin in Rolling Stones Magazine[1].” 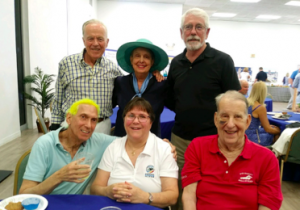 Dr. Johnson (right standing on back) is pictured in 1983 with Carallo, Dr. Jane Katz, Drury Gallagher and Dale Petranech from the Manhattan Island Marathon Swim award ceremony and banquet at The Water Club, a restaurant moored in the East River off 30th Street in lower Manhattan. A black and white copy of the same photo appears in the pages of the History of Open-Water Marathon Swimming. He noted, “We were a young and happy bunch that day as everyone was celebrating the success of their swims at a superb restaurant with a commanding view of the East River where they had swum past the day before.” Dr. Johnson began scouring the crowd of swimmers, family members, and well-wishers attending the Saturday luncheon at the International Swimming Hall of Fame.  As a yellow-haired swimmer walked past, he studied his face and called out, “Julius?” He replied, “Tim Johnson.” I then asked, “What happened?” He replied, “I joined the circus.” Carallo joined the circuit as a professional clown – known as Clown Chips – before returning to working as a head lifeguard, manager and swim instructor at Berkeley Aquatic Club in 2016.  Above is a photo of him during his days touring with the Cole Brothers Circus. [1] Levin, J., Endurance Fever, Rolling Stone Mag., Issue 407, October 1983. Copyright © 2019 by Dr. Tim Johnson, DPS, PE