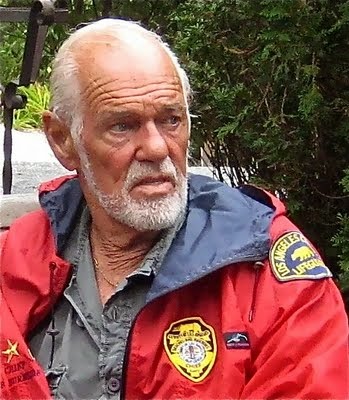 As part of this project, the first Spanish beach lifeguard training manual was developed primarily as a translation of the United States Life Saving Association manual. The development included a video depicting lifeguard issues throughout Mexico. Those efforts established Mexico’s first government lifeguard employees who now serve under the States Fire Division Chief.

Since the 1970’s, tourists and surfers alike had been traveling to a small village on Mexico’s Pacific Coast, a town named Puerto Escondido.

Burnside explains, “Dubbed the “Mexican Pipeline“, these awesome waves turned the sport of surfing more into a bullfight than a leisure activity. The powerful currents and the shallow sand bars, contribute to a year-round danger for swimmers and surfers alike. It is truly any lifeguard’s worst nightmare. It’s hard to imagine that, up until a few years ago, there were no lifeguards on this 3-mile stretch of beach not to mention anywhere in the State of Oaxaca, Mexico.

Years ago, a few local surfers were making rescues without equipment in conditions that would make any trained and equipped lifeguard think twice. Yet these brave young locals would continually put themselves in harm’s way to try and prevent the numerous drownings that would occur each and every year.”

A few visiting surfers from California started bringing down rescue equipment for themselves and their friends’ own protection. They left the equipment behind with the locals when they went home, establishing a local tradition.

In 1986, Burnside came to Puerto Escondido to surf the Mexican Pipeline. Since he had heard of the dangerous conditions and the need to bring rescue equipment, he arrived with 6 rescue tubes and a few pairs of fins. He recalls, “I could not believe that I was looking at 25-foot high, beautiful A-frame waves rolling in along the playa, but there were also horrendous rip currents spaced every 100 meters or so along the shore, boiling and churning with kelp, sand and everything they came in contact with as they raced violently seaward.”

Jose Luise Estrada, a local Mexican surfer, told Burnside of the many rescue he and his surfing buddies made without any equipment or training. One thing led to another and Estrada was supplied with rescue equipment, and lifeguard training and served as the first captain of the Zicatella Salvavidas Club de Mexico together with Jorge Perez, Miguel Baylon, Juan Luis Bohorqez, Pablo Juarez, Jim Prewitt, Pablo Sarmiento, and Francisco Samperio.

The United States Lifesaving Association gave its full support to the group and Burnside was appointed as its liaison. By 1994, Burnside was asked by the governor’s office to submit a master water safety plan for the entire coastal region of Oaxaca.

Club Tortuga led to the formation of Los Busos Club Zipolite and other locally remote volunteer groups. The Junior and Handicapped Junior Lifeguard programs were started within Zicatella Salvavidas Club de Mexico that continue to this day as well as the Mexican Lifeguard Exchange between Puerto Escondido and Huntington Beach [California].

In 2014, Bob Burnside received a Paragon Award for his outstanding and influential lifelong contributions to Aquatic Safety in acknowledgement of his work both in Mexico and as the first president of the Surf Lifesaving Association in 1964.

“The annual Paragon Awards bring some of the most interesting and fascinating people each year to the Hall of Fame,” said International Swimming Hall of Fame President and CEO Bruce Wigo. “These are the unsung heroes who make competitive and recreational aquatics possible, who save lives, who promote water safety and further aquatic education.”

Burnside continues to compete in ocean competitions at the age of 82.