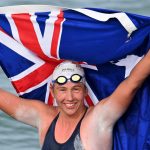 Chloë McCardel (Australian) holds multiple marathon swimming World Records. Chloë continues to push the boundaries of marathon swimming and what the human mind and body can achieve. Described as the greatest ultra-marathon swimmer in history, an inspiration and role model, Chloë aims to achieve the impossible.

Chloë has uses her extensive marathon experience to provide high quality, specialised swim coaching to her swimmers. She has coached and coordinated over 150 people, from the ages of 15 – 60 years, from across the globe, to swim the English Channel in relays and solos. She has recently launched World First Relays to be held annually between Ramsgate (England) to Nieuwpoort (Belgium) from July 2022, a distance of 92km across the cold and rough North Sea.

The training for the relays (which includes extensive coaching and cold water swim camps) in conjunction with the relays themselves are arguably the best training towards a future English Channel or other solo marathon swim. They are also an amazing life changing adventure in their own right.

She has been coaching English Channel swimmers since 2013. One of her swimmers, Rick Seirer, a farmer from country Victoria, became the oldest person in history to swim a double non-stop English Channel crossing (68kms) in 2019. He took 30hrs to make the 68km journey in circa 16C water.

Chloë is also an international keynote speaker and advocate on behalf of domestic violence victims.

2021 Guinness World Record
- For swimming the English Channel more than any other individual.

2016 International Swimming Hall of Fame (ISHOF)- 2016 Poseidon Award
- For her high level achievements. In less than six weeks in 2015, Chloë posted an unprecedented set of marathon swimming accomplishments: Established record for three English Channel crossings in a week – all under 10 hours and a triple non-stop crossing of the English Channel - 36 hours 12 minutes. A triple crossing had not been accomplished in the previous 25 years.

A Huge Transformation For Chloë McCardel