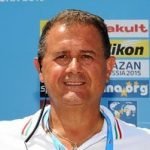 Giuliani was recognized as an Honor Contributor – Coach by the International Marathon Swimming Hall of Fame as a member of the Class of 2020. He will be honored at a IMSHOF ceremony in New York City on 2 May 2020.