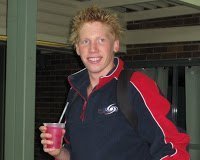 Codie Grimsey is gearing up to follow his brother as the King of the Sea by winning another ocean sprint swim, this time in Australia’s most famous beach, Bondi.

The Banana Boat Bondi to Bronte Ocean Swim is a 2.2K point-to-point course that starts at Bondi and finishes at Bronte. With the water temperature at 17.5°C, swimmers would allowed to wear wetsuits (for swims under 18°C).

Peter Thiel, captain of the Australian team that has won the last several Maui Channel Swims, took the pace out quite fast, before Jarrod Killey, Josh Beard and Codie took the lead. By the 1K mark, the trio had established a fair lead.

In a clear demonstration of his fitness, Codie pulled away and won by a minute. “The beach was beautiful and the conditions were generally flat with a few large dumping waves right near the end.”

The fastest 20 swimmers of a total of 1,598 finishers included: