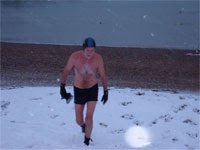 From the Bristol Channel in south Wales to Brighton on the south English coast and many places throughout Great Britain, thousands of adventurous and merry swimmers took to the cold winter waters on Christmas day.

Cold water and festively dressed swimmers were the overwhelming themes of the day.

Photos confirming the joy and revelry of happy swimmers can be seen here.

Photo above shows long-time Brighton Swimming Club Bob Phipps finishing his regular morning swim. Like dedicated masters swimmers around the world, Bob gets in his swim before heading to work. Bob follows in the footsteps of fellow Brighton Swimming Club members who have long enjoyed sea swimming since 1860.

Since Brighton businessmen first did at Albion Beach in 1858 (see photo above), members have long promoted and colorfully demonstrated the health benefits of cold-water sea swimming.