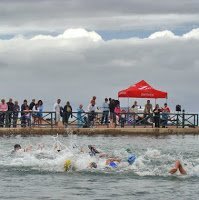 The wind and clouds did not put a damper on the inaugural 1K, 3K and 5K Kouga Express Eastern Province Open Water Swim Swimming Series (OWSS) in the circular course in Marina Martinique in South Africa. Michael Marais won the 5K in 1:03:16 with Jessica Roux taking the 5K women’s race in 1:07:10.

8-year-old Alexa Vaughn from Port Elizabeth finished the 1K race. “I didn’t think it would be so far when I entered but I just did some breastroke and freestyle and then sprinted the last 200 meter to the end of the race. I will be back in Jeffreys Bay next month to finish my next 1K.”

Brenton Williams (shown with Alexa on left), coach of the host Kouga Swim Club, explained about the 6-race series, “Open water swimming is one of the fastest growing extreme sports in the world and interest is growing after the inclusion of the 10K marathon swim in the Olympics. Open water swimmers must be ready to compete in all weather and water conditions which adds to the challenge of swimming long distances.

The Eastern Province Open Water Swimming Series is designed to nurture swimmers along until they are ready to compete in the 10K event, which is only open to swimmers of 16 years and older.”