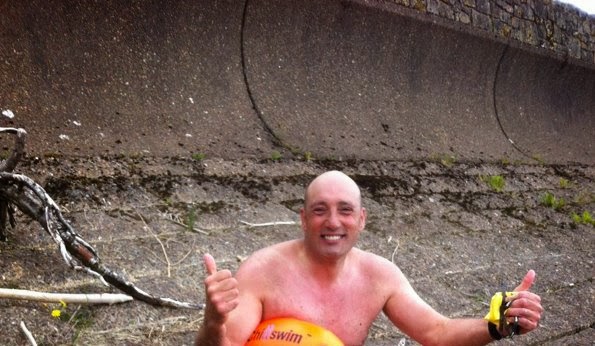 Kielder Water is a 5-mile reservoir, the largest man-made body of water in the UK, located in Northumberland in northeast England The local authorities have not allowed any open water swimming in Kielder Water since the 1980s when a swim was organized by the British Long Distance Swimming Association.

But Hill wanted something tangible, something historic, something memorable. So he worked to receive special permission for a point-to-point swim from the dam wall to dam. “It a great swim,” recalls Hill. “I have wanted to do this one for years.”

Hill prepared in a uniquely unselfish way for his pioneering swim. “I must admit I was pretty tired this morning after driving the support boat for Nik Barnes who did Windermere two-way in 17 hours yesterday. That is a long time driving the support rib boat in less than favourable conditions.”

Not all of Hill’s swims initially turns out so well. “I attempted the Morecambe Bay crossing after [there were] no swim attempts since the 1980’s due to shifting sand banks and silting. It was tough. The support boat did struggle to find a way across, so we had a delayed start. I managed 2 hours 30 minutes before the tide meant we had to stop, so I will try that again in two weeks on next tide with a kayak support to try and get me past the early sand banks to meet up with the support boat, which should give me an extra hour swimming time.