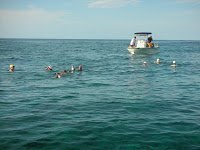 Kate Alexander reported that seven swimmers ventured past beautiful reefs from Cayman Brac to Little Cayman, the two Sister Islands to Grand Cayman, in the first channel crossing in 23 years.

The swimmers traversed over The Bogue (which reaches a depth of 4,045 feet) in the 5-mile channel crossing on April 18th under ideal conditions.

Warm weather and broad flat swells made for a relaxed swim in the early stages, as a favorable tail current pushed the pack half-way in an hour, but a strong head current made the finish a bit of a challenge.

The Cayman Trench is one of the deepest in the world where Alex Harling, Bill McFarland, Kate Alexander, Andrea Roach, and Joy Yeatman joined Felix and Matthew in a crossing that took 3 hours and 30 minutes. Michael Hundt crewed the first known crossing in 1987 when Jeff Miller completed the swim.

Kathleen recalled, “It was awesome, glorious. I was grinning most of the way over. I was kind of sad when I finally pulled up on shore, I didn’t want it to end. We swam over gorgeous reef for the first 20 minutes and last 45 minutes – the rest was deep blue, over 4,000 feet. Normally I’m scared of deep blue but I wasn’t this time, not one whit, don’t know why.”

“The whole thing – weather, arrangements, swimmers who participated – all fell together beautifully. No jellyfish, no chop. It was one of those magical days. We swam together as a group at the pace of the slowest swimmer and chatted when we took drink breaks, just floating out in the channel enjoying the quiet. Wow, it is so quiet out there. I could go on and on…”