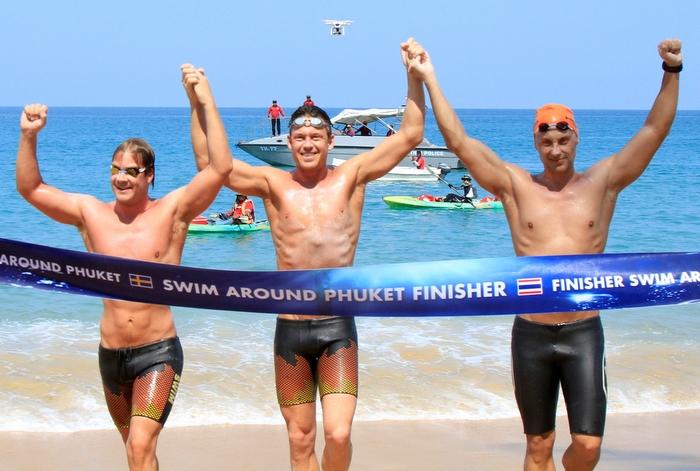 It is always cool and an honor when the local leading or national politicians are present at the end of an open water swim.

“We are proud that someone has made history by becoming the first man to swim around the beautiful island of Phuket. This is a great activity to showcase Phuket as a sports and tourism hub of Asia. Big congratulations to Jonas, his team and to the organizers,” said Phuket Governor Chamroen Tipayapongtada.

With the tropical heat beating down on their backs for 8 days, Colting was prepared. “I was aware of the big challenges of being in the heat and the sun. We took lots of proactive measures like getting in the water early in the morning, using lots of sunscreen, and [drinking] some young coconut milk every day after finishing.”

Organized in conjunction with Thanyapura Phuket and Apollo Sports Sweden, the trio plan to make Swim Around Phuket an annual event. “At Thanyapura, we had a dream to organize a swim around the island of Phuket. Thanks to Jonas who dared to dream with us and made it into a reality,” said Thanyapura President Philipp Graf von Hardenberg at the finish.

His unprecedented stage circumnavigation around Phuket raised funds for the Yaowawit School, a government-approved boarding school for children from underprivileged families, initially founded to help children who were victims of the 2004 tsunami.