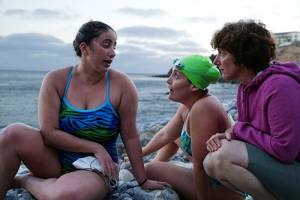 Courtesy of Suzanne Samuels, mother of Charlotte Samuels, the youngest person to complete the Triple Crown of Open Water Swimming.

“Come to me,” I urged, scuttling back and forth along the narrow edge of the deck, signaling over and over to my daughter where she should be.

Charlotte [Samuels] had been in the water seventeen hours by then.

She had swum through the blackness, the searchlight trained on her, the only other illumination the dozen or so green light sticks we had strung from the boat’s railing, reminding me of the lights I affixed to her costume when she first began to trick-or-treat in the dark. The moon was full, but its light was obscured behind the clouds, and as the darkness fell, it was with such finality that I was glad those lights were there.

She had swum amidst the ocean-bound freighters, big as buildings. She had swum through British waters, then the southbound shipping lanes, then the neutral zone, and then the northbound lanes. About an hour before, she had entered French waters.

I was worried. Nothing new there. I was often worried. But this wasn’t like the fear I had felt the night before, when she had set out from the deserted beach near Dover, bound for France, some twenty miles away. That had been terror – this was worry.

I knew she was safe. It was around two in the afternoon. The sun was overhead – not overly strong, as it had been in Catalina earlier that summer. The currents had been running back and forth – with her, then against her, not the relentless currents of the Cape May circumnavigation last year. The water temperature had been holding steady – there were no dramatic thermoclines like off the coast of California, where she had swum in and out of waters that were ten or more degrees cooler. So this wasn’t terror, not even really fear. I knew that she was safe.

The crew had been monitoring her progress through the long night and day. The official from the Channel Swim & Pilot Federation had been looking for signs that she was in trouble, that she had grown too tired, or dehydrated, or malnourished. The boat captain, too, was on the alert. This had been a long swim, a difficult swim, with whitecaps and fickle currents. There was a lot of water in the channel – the spring tide was to begin that evening, and with it came much more changeable and unpredictable conditions. There had been two deaths in the last two years – accomplished swimmers who had rolled over and died within a mile of French shore – and this captain certainly wouldn’t have wanted the death of our teenage daughter to be linked with his boat.

Her support crew – her dad, and Tracy [Clark] and Roger [Finch], two veteran Channel swimmers – were on the lookout, too, though their vigil seemed more casual. Tracy was keeping up a lighthearted banter with Charlotte, a constant stream of encouragement that left her hoarse for days afterwards.

“You’re doing it, darling!” she called out. And though Charlotte probably heard little of this, her head turned from side to side, breathing, first on the left, then on the right, thousands, no, probably tens of thousands of times that day, there were times that I saw the hint of a smile as she turned her face back into the water.

Roger was joking – that was his way – and I kept listening for subtle clues from him that Charlotte was in trouble, that she should be pulled out.

“It’s up to the Channel gods,” he had counseled her in Dover Harbor the weeks leading up to this swim. “You do your best, but in the end, it’s up to them.” I looked at Roger, his legs stretched out in front of him, his hands across his lap, his face towards the sun. A messenger of the Channel gods, I thought, smiling.

And her dad, too, was vigilant. He was watching, always, watching – her stroke count, how she looked when she was feeding. And when I asked, which was often, he responded that she was doing fine, holding her own, making progress – some variation of this.

So I wasn’t worried for her safety. After having been on this boat for seventeen hours — many of them bent over the side heaving into the sea – I had convinced myself that she was safe. No, this was a different kind of worry. As the sun moved across the sky, I began to worry that she wouldn’t finish. We had seen the coast of France since the sun had come up and I knew that she had, too. Despite having swum for that whole morning and now several hours into the afternoon, the coast still seemed just out of reach.

About an hour later, something changed on the boat.

“Five kilometers,” the boat captain had informed. “She’ll need to sprint.” Then the explanations from Roger and Tracy.

“The current has been challenging,” Tracy explained. “It’s taken her off course – during the night – now she’ll have to sprint to avoid being swept beyond Cap Gris Nez.”

And then the imaginary maps, drawn on blankets, on outstretched palms, in the air.

“This is the coast of France,” Roger said, this South African accent drawing out the word ‘France,’ making it more exotic. “This is the Cap. If she keeps going at this pace, she’ll be pulled beyond it and have to swim much longer.” Unspoken: the possibility that she would be swept so far off course that the swim would be forfeited.

Then the plan. Cut, hard, towards the shore and push for the next five kilometers.

In open water swimming, the swimmer sets the pace and the support boat follows. This is what our boat captain had done – here, in Catalina, in Manhattan, and in all of Charlotte’s other swims.

But now, the captain turned this rule on its head. He began to lead and Charlotte had to follow. That was an hour ago. Since then, I had been trying to help Charlotte to keep her pace.

“Come to me,” I urged again. Like when she was a baby, just learning to walk, trying to get from the couch to the coffee table to the rocker.

“Come to me,” I’d say then, holding my arms out wide. She’d giggle forward, sometimes tumbling into my arms, sometimes falling. I tried not to think of the falling now, focusing instead on this one thing – keeping her near to the center of the boat. When she needed to feed, we urged her to do it even more quickly – each moment that she wasn’t swimming, she was falling behind. At one point, she had slowed to feed and slipped in back of the boat.

“Come on, right here,” I signaled, beckoning forward. I tried not to think about whether she would make it to shore – whether she could accomplish this almost unfathomable thing. I focused instead on just keeping her close to me. In that one spot, I could see her clearly. I could even touch her, though I knew that I wouldn’t. If she was in trouble, if she needed to stop, I would be the one to see that, too. To be her champion.

And she did. Over and over, until finally, it was time. With one kilometer left, the captain announced that Charlotte would need to swim for shore. By then, we could clearly see the pastel-hued cottages of Audresselles, and even the bathers on the beach.

Then there was nothing left to do but wait.

On the boat, we shared the binoculars. We watched as she made her way, slowly, to the shore. I couldn’t see her face when she reached it – I couldn’t hear, firsthand, what she said. When she got back to the boat, she’d tell us how she dived down to get that one, ugly rock. How it felt to take those last few strokes. How sure she had been, all along, that she could do this, if given the chance.

We weren’t there on that beach. But as I watched her from so far away, I remembered what it felt like when she took her first steps away from me – how it felt to let her go – at first, back to the coffee table, to the couch, and then, to nursery school, to summer camp. And now, to this – swimming in the ocean, in waters that were unfamiliar and even hostile.

Come to me, I thought, watching her swim away. And then, go on ahead.

Photo by Dan Krauss at the end of Charlotte’s 19 hour 45 minute Catalina Channel crossing with her mother and pace swimmer.