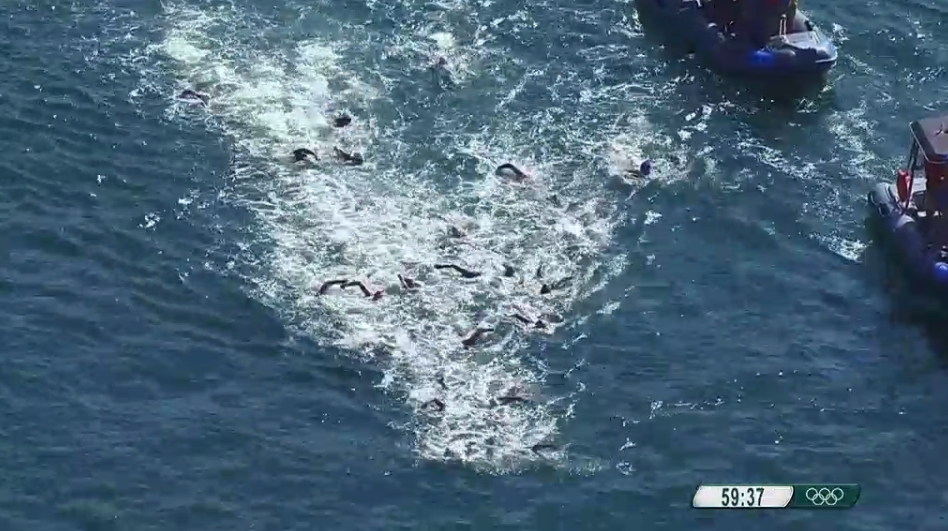 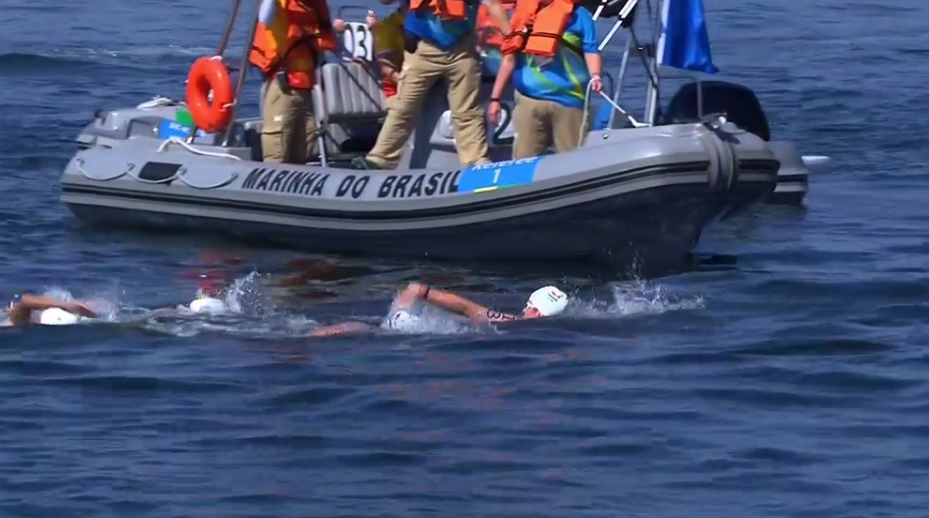 Images courtesy of NBCOlympics.com of the Olympic triathlon in Copacabana Beach in Rio de Janeiro.

After hearing for months on end in the American press, repeatedly and critically about how the 2016 Rio Olympic Games were going to fail with all kinds of problems from the Zika virus to the dangerous waters of Copacabana, the Games ended successfully and were spectacularly a celebration of athletic performances by individuals of every size and sport, age and background.

From the sweep of the Olympic 10K Marathon Swim by the Dutch swimmers Sharon Van Rouwendaal and Ferry Weertman to the physicality shown by runners on the track and open water swimmers on Copacabana Beach, we very much enjoyed the close races and the dominating performances.

Our top 10 moments in the Olympic 10K Marathon Swim were as follows:

10. The tears of joy and the tears of disappointment; the broad smiles and the genuine hugs of the athletes after the men’s and woman’s races were completed.

9. The bold, exciting, but ultimately unsuccessful strategy of Jarrod Poort. The 21-year-old from Australia shot out to the lead and tried to steal the race with an unusual strategy.

8. The NBC televised and online production from a helicopter, in-the-water cameras, onshore cameras and offshore cameras on the 10 km marathon course that enabled viewers to see a combination of panoramic and close-up views of the athletes. The camerawork was outstanding as it allows millions of viewers around the world to understand the constantly changing leaders and constantly dynamic lead and trailing packs.

7. The local organizers who had to reconstruct the 10 km marathon course in less than 48 hours in light of the large surf and weather conditions that wiped out the course.

6. The outspoken complaints by Jack Burnell. The 23-year-old from Great Britain was not timid in his public criticism of his rivals and the officiating on the race course with the hopes that positive changes will be made by FINA.

5. The officiating of John West in the women’s race. The New Zealand representative on the FINA Technical Open Water Swimming Committee had to make a judgment at the very end of the race that changed the medalists on the podium.

4. The final straight-line finish by Rachele Bruni. The 25-year-old from Italy held her position despite swimming stroke-for-stroke with Aurélie Muller to capture a silver.

3. The gold medal performance by Ferry Weertman. The 24-year-old from the Netherlands timed the perfect finish to seal a dramatic 8-wide sprint.

2. The gold medal performance by Sharon Van Rouwendaal. The 22-year-old from the Netherlands took control of the race at the feeding station and was committed to sprinting 3 km to victory.

1. The silver medal performance by Spyridon Gianniotis. The 36-year-old from Greece swam arguably the best race of his life and climaxed his career of five Olympic Games with a dramatic silver medal swim.