Connecticut Mermen On Their Way To The Oceans Seven 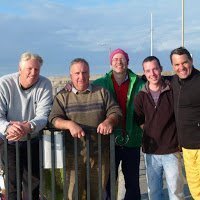 Chris Kraus, Rick Gaenzle and Brian Ross consist of a unique 3-man relay team based out of the marathon swimming hotbed of Connecticut in the United States.

In addition to their successful relays across the North Channel (Ireland-Scotland), Strait of Gibraltar (Spain-Morocco), and the English Channel (England-France), they will attempt their fourth Oceans Seven challenge across the Tsugaru Channel (Honshu-Hokkaido) in Japan this August.

They are the only known relay that are attempting to complete the Oceans Seven.

“We have also completed numerous other open water swims, both as relay and singles, including double crossings of Alcatraz in San Francisco as soloists,” explained Kraus. “We train extensively in Long Island Sound most of the year, as well as indoors during the winter months.”

The trio swim each channel in traditional 1-hour legs. “We did the North Channel between Ireland and Scotland last summer in 10 hours 18 minutes in the 12ºC (55ºF) water. I did the first leg, followed by Rick, then Brian to complete the fastest relay crossing.”