Continents Seven: Values For Sports, Business And Life, Learned Around The World 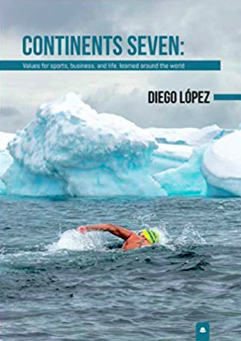 Continents Seven: Values For Sports, Business And Life, Learned Around The World

Continents Seven: Values for sports, business and life learned throughout the world is a book written by Diego López Domínguez, a Spanish open water swimmer from Las Palmas de Gran Canaria in the Canary Islands known as the Global Swimmer or the Spanish Bull, about his Continents Seven achievement.

He writes about values for sports, business and life that he learned throughout the world.

The Spanish-language edition, Siete Continentes: Valores deportivos, profesionales y humanos forjados alrededor del mundo, is also published and being sold. The book will be officially presented in Spain and in New York in October.

López defines himself as an adventurer and an entrepreneur. Given his focus of marathon swimming and ice swimming [see his Antarctica Ice Kilometer swim below], he is truly an advocate of globalization. He worked for 12 years for major consulting firms in Madrid, Milan, London, Qatar, Abu Dhabi, Hong Kong, Rio de Janeiro, and New York City. He is one of the few global experts in Sovereign Wealth Funds, and has acted as an external consultant for the World Bank and the United Nations while living in 8 different countries and visiting over 80 nations.