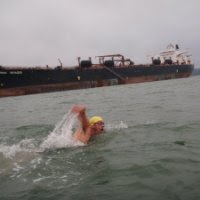 While there are well-known personalities in each of these venues volunteering their time, Darrin Connolly from Milpitas, California may have the ultimate job for a passionate open water aficionado: he gets paid to be part and parcel of the Bay swimming community. He is employed to be out there in the open water.

A member of the Night Train Swimmers, Connolly has done a number of swims in and around San Francisco Bay and Lake Tahoe as well in the Farallon Islands and the Maui Channel Swim. He explains his allure the Farallon Islands, “The Farallones present a very beautiful and challenging route to swim that very few people get the chance to attempt. The Farallon Islands themselves are very well known and make for a great conversation.”

The community that Connolly plays such a key role in appeals to his sense of teamwork as a former basketball player and his love for outdoor adventure. “Regarding relay swims in the open water, I love the camaraderie of team sports as well as being in and on the wild Pacific Ocean.”