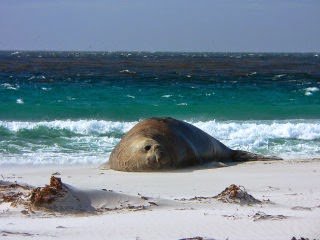 Sea Lion Island (Spanish: Isla de los Leones Marinos) is the largest of the Sea Lion Island Group and the southernmost island in the Falklands archipelago. It is 9 square kilometers (3 square miles) in area and a breeding territory for the huge southern elephant seals.

The Falkland Islands Development Corporation owns the island in the Atlantic Ocean with ecotourism its only economic activity. In 1986, the Corporation built the Sea Lion Lodge that is used by tourists and scientific researchers.