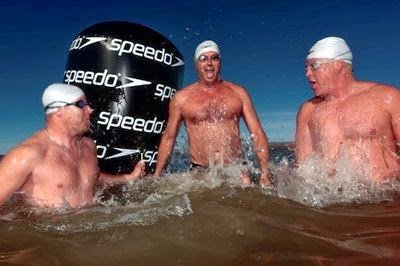 It is not often an open water swimmer starts a global movement, but Ram Barkai and his colleagues at the International Ice Swimming Association have certainly done so.

Throughout Europe and North America, from Africa to South America, swimmers are plunging in extreme cold and pushing themselves beyond what anyone thought possibly in the previous centuries.

And not just superstar Lynne Cox, but athletes of all ages and abilities.

Barkai‘s International Ice Swimming Association was nominated for the World Open Water Swimming Offering of the Year. The organization provides the rules and regulations to conduct an ice swim. The association provides structure and advice on how ice swims can be safely and officially held around the world. The governing body provides many the impetus to test themselves in what may be the most difficult short-distance open water swimming challenge in the world.

Barkai’s vision and service is motivating many to find their niche in the open water swimming world. These athletes can excel in a field where most humans could never even imagine, with the ice mile as their featured event. For that creation of specific niche, the International Ice Swimming Association is nominated as follows, “Ice swimmers are extremists. These athletes come in all shapes and sizes with the unique ability to push themselves farther and colder than other humans and scientists think possible. But nothing is impossible for these hardened groups of extreme athletes. The International Ice Swimming Association, founded by Ram Barkai, promotes, advices, and ratifies individuals who attempt and achieve extreme open water swims in water temperatures under 5°C (41°F). Its standardization of rules, protocols, and procedures are helping to shape the sport of ice swimming. Its growth may someday lead to an inclusion of ice swimming in the Winter Olympics. For its emphasis on safety, for its interest in pushing the physical limits of where ice swimmers can go, for organizing the sport in a global unified manner, the International Ice Swimming Association is a worthy nominee for the 2013 World Open Water Swimming Offering of the Year.

The nominees for the 2013 World Open Water Swimming Offering of the Year include: