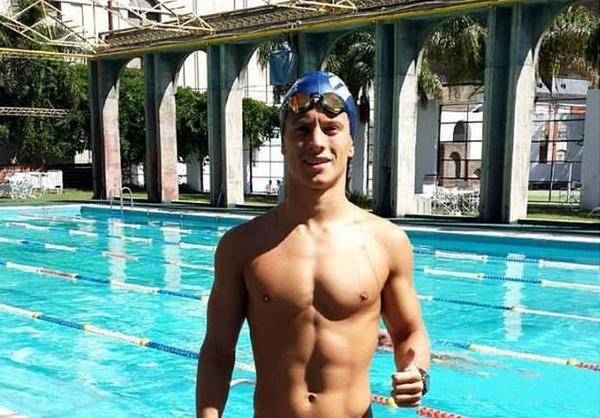 21-year-old Nicolás Segurado qualified to compete in the 57 km Maratón Acuática Internacional Santa Fe – Coronda for the first time in his native Argentina.

“I fulfilled my goal that I set and I was able to complete the course [in 9 hours 26 minutes in 11th place]. The swim was very hard because of the wind we faced. The waves were so high that I almost stopped, but I tried to finish and we eventually reached that goal.”

But it was not easy. “We had problems with the boat escorts. I was swimming practically an entire hour without their support and without the possibility of feeding which is fundamental. But we were able to complete the race and are quite happy with the result. This year, my main thing was to finish; next year we will go for more.”

He is now targeting the next FINA Open Water Swimming Grand Prix race in Canada. “Last year, I was able to compete in Mexico, but I could not keep up with the pace. I hope to fulfill my goal this season. The next competition will be in Canada in July, where the water is much colder, but luckily FINA has approved the use of neoprene.”

He is finally able to train in Cordoba where he has access to a 50-meter pool with the opportunity to train up to six hours a day.

BCT Gdynia Marathon 2015 – a new formula, more emotions! BCT Gdynia Marathon 2015, an extreme competition in swimming in open waters will take place on August 21-23. This year the event shall be carried on according to a new extended formula allowing for playing up to six races practically at the same time. Thanks to this, provided the weather allows, the Hel – Gdynia Marathon and the accompanying races will take place on the same day! The organizers are convinced that the new formula of the competition will be more attractive for fans. In the second half of August the waters of Puck Bay will once again become a stage for the struggle of fifteen selected long-distance swimmers, who will participate in Hel – Gdynia Marathon. So far the Olympic Games participants and the World and Europe Championships winners participated in this prestigious race. The Organizers want to conduct also the OPEN Competition consisting of two shorter, spectacular races along the Nadmorski Boulevard, in which up to 150 not so successful swimmers will take part. Also, we will conduct SPLASH race for the youngest swimmers, and a relay race. “This year we would like all races to take place – for the first time – on the same day. We are convinced that thanks to such solution we will offer more emotions to our fans by making the event much more spectacular. Nevertheless, due to situating a portion of routes on the open waters of Puck Bay, the decision regarding the precise dates of particular contests shall be made three days before them being scheduled, so that we are sure that the weather will not play any trick on us” – said the President of the Baltic Container Terminal, Krzysztof Szymborski. In the Competition Village located at Nadmorski Boulevard, besides the sport emotions, the organizers plan a lot of other attractions, such as the show by a cheerleaders team, contests with awards or an opportunity to watch the transmission from water and from the air of the struggle on the whole route of Hel – Gdynia Marathon. International referees, observers and representatives of swimmer organizations issued a very positive evaluation of the previous editions of BCT Gdynia Marathon, stating that last year this competition could already be included in the group of the most prestigious swimming marathons in the world. Taking into account the changes planned by the organizers this year one may be sure that this year’s edition will give the gathered fans plenty of emotions and pleasure. BCT Gdynia Marathon 2015 ü Marathon on Hel-Gdynia distance (over 20 km) – 21, 22 or 23 August (depending on the weather) ü OPEN race (2950 m) – 22 August ü SPLASH race and 4×200 m relay race – 22 August ü Fan Zone – Gdynia, the beach at Nadmorski Boulevard (next to Nadmorski Hotel), on the days of races Baltic Container Terminal is the main sponsor of the event SJ Consulting is the organizer. The honorary patrons of the event are: Andrzej Biernat – Minister of Sport, Wojciech Szczurek – President of Gdynia and Klemens Kohnke – Mayor of Hel. The media patronage: Dziennik Bałtycki, Radio Gdańsk, Namiary na Morze and Handel and trójmiasto.pl. Organization of the marathon is supported by the Gdynia’s Municipal Office, Hel Municipal Office, Polish Swimming Federation, Formoza RIB, Nadmorski Hotel and Arena firm. More information: Mikołaj Nałęcz- Nieniewski [email protected] Copyright © 2015 by World Open Water Swimming Association

People of different ages drown in different locations. For example, most children ages 1-4 drown in home swimming pools.2 The percentage of drownings in natural water settings, including lakes, rivers and oceans, increases with age.2 More than half of fatal and nonfatal drownings among those 15 years and older (57% and 57% respectively) occurred in natural water settings.2 As part of RBC’s ongoing commitment to children’s well-being across Canada, RBC Insurance will announce a new multi-year partnership with Swimming Canada on Tuesday. Canadian swimming icon and Olympic gold medallist Mark Tewksbury will help kick off this program along with RBC Olympian Martha McCabe, Swimming Canada and RBC Insurance executives. This partnership will include support for the development of Canada’s Swim Team, an initiative to teach every Canadian child how to swim 25 metres before the age of 12. According to Canada’s Swim Team partners, a large majority of drownings are preventable when a child can swim 25 metres. RBC Olympian Martha McCabe and fellow Canadian national swim team member Brittany MacLean will be on hand to conduct a swimming clinic for the newest members of Canada’s Swim Team. As part of the RBC Learn to Play Project, the RBC Foundation will also be announcing a $10,000 donation to the Junior Blues Adapted Aquatic Program for children with physical, mental and developmental disabilities. This program will help towards ensuring all Canadian kids have an equal opportunity to learn to swim. When: Tuesday, May 13, 2014 11:00 a.m. – 11:45 a.m. Where: University of Toronto Athletic Centre 55 Harbord St, Toronto, Ontario *at the University of Toronto pool Who: Mark Tewksbury, Olympic Gold Medallist Martha McCabe, Canadian national team member & RBC Olympian Brittany MacLean, Canadian national team member Ahmed El-Awadi, Chief Executive Officer for Swimming Canada Rino D’Onofrio, Head, Canadian Insurance Business, RBC Insurance MEDIA CONTACTS: Greg Skinner Corporate Communications RBC Insurance t: 416 294 5579 e: [email protected] Nathan White Communications Swimming Canada c: 613 866 7946 e: [email protected] Copyright © 2014 by World Open Water Swimming Association