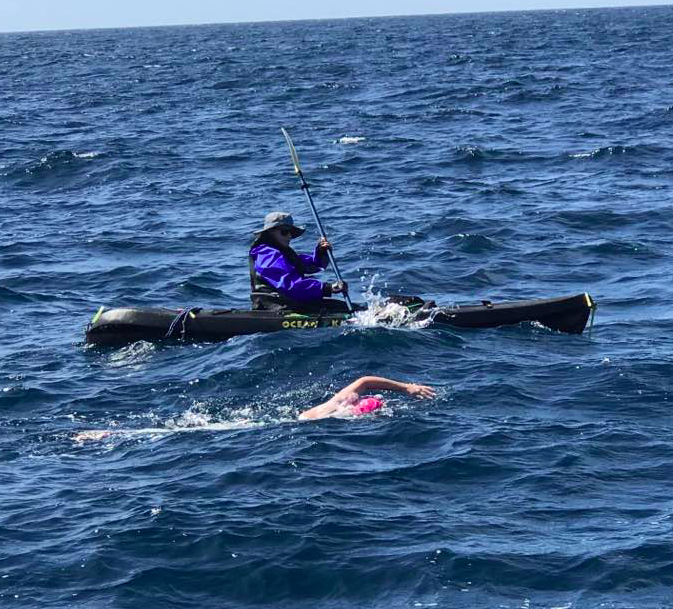 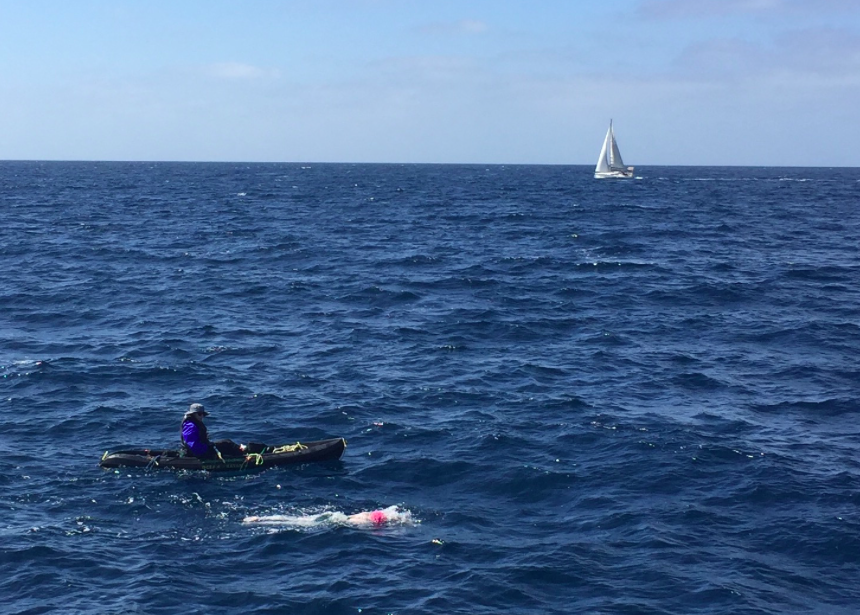 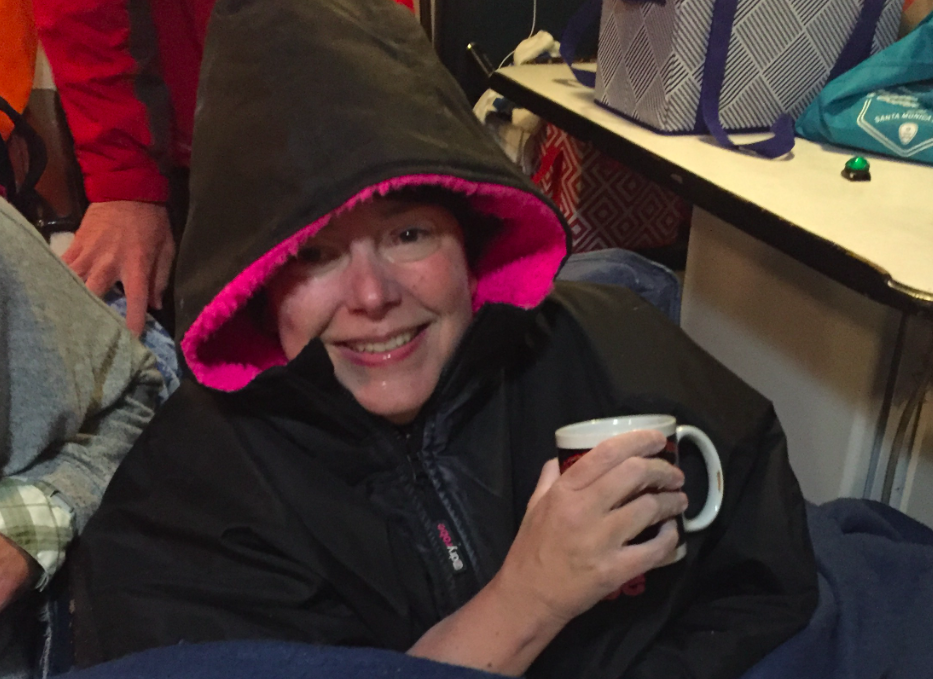 “What an amazing swim. I just can’t even believe it,” she admitted.

The Catalina Channel Swimming Federation described her two-way crossing that started on the Southern California mainland at the Terranea Resort near sundown on Tuesday, October 10th and ended at the same point in the early morning of October 12th. “Courtney endured a punishing wind chop and white caps though most of the day. She opted to swim on the windward side of Bottom Scratcher rather than the leeward side where she might inhale exhaust fumes. Courtney remained enthusiastic throughout and, in the middle of the night dolphins, treated her to an underwater bioluminescence show. Though late in the swim, Courtney saw other imaginary stuff due to hallucinations.

Her team kept her fed on cocktails of CarboPro, Tailwind, tea and chicken broth with helpings of peaches and applesauce
.”

Courtney Moates Paulk: 40 Bridges helped me prepare for this swim in so many ways. First, going into Catalina, I had the confidence of coming out of a 20+ hour swim just ten weeks earlier.

Second, I had to battle some significant current during parts of Catalina. In July, we spent four hours swimming against the strong current in the Harlem River in the wee hours of the morning in 40 Bridges. That certainly helped prepare me mentally to deal with the currents in Catalina. The primary difference is that, in 40 Bridges, it was incredibly apparent that I wasn’t making much progress against the current because I could judge my speed against the seawall. Of course, in Catalina, it was mostly the perception that I wasn’t making any progress at times.

Third, the training leading up to 40 Bridges carried me into the final push for Catalina.

Fourth, I paced myself really well in 40 Bridges and I applied that same discipline to Catalina. I started out with a measured pace and that paid off in the long run.


Daily News of Open Water Swimming: Did you have any idea it was going to take you over 33 hours?

Courtney Moates Paulk: I believed it would take me 25-30 hours, but I had prepared my team for up to 36 hours. I had a great swim over to Catalina Island in 12 hours and 28 minutes. Even though the conditions were rough through the night and the wind and sea never really settled, I felt great when I landed on Catalina.

The conditions on the way back to the mainland were also rough with wind, chop and whitecaps. I had a relatively favorable current for the first few hours of the return trip which allowed me to make some decent progress. However, then the current turned against me and that, combined with the rough conditions and building fatigue, really slowed my progress.


Daily News of Open Water Swimming: Can you describe the most difficult hours of the swim?

Courtney Moates Paulk: The most difficult hours of the swim began at sunset on the second night. I had seen the sunset the night before and, while I had anticipated seeing a second sunset, emotionally, it hit me pretty hard.

Also, around sunset I began having some hallucinations and they progressed until the conclusion of the swim and, to a lesser extent, into the next day. I had enough sense to realize that the hallucinations were, in fact, hallucinations (for example, I saw a walrus in Dan Simonelli’s kayak – but I KNEW that Dan did NOT actually have a walrus in his kayak).

I also kept my mouth shut about them because I didn’t want to worry my crew. Thankfully, the hallucinations went away once I got some sleep after the swim. Unlike the first night, the sea conditions calmed a bit during the second night and it was actually lovely.

But, because I was fighting a current and fatigue, I was making very slow progress. I typically do a good job of not looking at the shore to try to determine how much farther or longer I have to go – but, I became pretty frustrated and a little concerned from the hallucinations. I commented on several occasions that I wasn’t making any progress and Dan and my crew assured me that I was making progress – just slow progress.

We also changed course a bit and that caused some confusion on my part. The last mile of the swim was absolutely brutal. I was cold and the hallucinations had gotten worse. Without Dan in the kayak next to me, I’m not sure I would have finished. Kris Rutford helped Dan from the water at the end of the swim to ensure a safe finish.

The surge at Terranea was particularly bad and that, combined with the dark and my fatigue made the landing pretty cruel. I got banged up on some rocks below the surface before I even reached shore and climbing out seemed to take forever. When I finally heard the siren from the boat that I was finished, I collapsed down on the rock and started to cry – mostly from relief, but also from joy. Dan and Kris hugged me and congratulated me and I will never forget that moment with them sitting on a rock below Terranea.

Then, they told me I had to get back into the water to swim to the boat. Of course, I knew I would have to do this – but, the last thing I wanted to do was to get back into the water and risk getting beat up on the rocks like a pinball again. They finally convinced me I had no choice. Dan pulled me behind that kayak to the boat (not easy after kayaking for hours) and everyone helped me on board.

What an amazing feeling it was to step on the solid floor of the boat. After I got my suit off and layered up, I enjoyed an amazing bowl of mashed potatoes.


Daily News of Open Water Swimming: At what point did you get sleepy?

Courtney Moates Paulk: I never really got sleepy. I was fatigued, but never sleepy.

Daily News of Open Water Swimming: Who was your pilot and who was on your crew?

Daily News of Open Water Swimming: Did you go to work the next day – or how soon after were you able to function or work normally?

Courtney Moates Paulk: We got back to the house where we were staying a little after 6:00 am I went straight to bed – without a shower. I was still hallucinating and I really felt I just needed to sleep. I woke up about four hours later and had a snack and a few large glasses of water. I rested in bed for a while and fell back to sleep for a bit. I was up around 3:30 pm and finally took a shower. We then headed with some of the crew down the street to dinner. I was in bed again by around 8:00 pm that night and slept really well. I had some pretty terrible chafing in my armpits – but, otherwise, my body felt pretty good. I was tired, but not too sore.

Daily News of Open Water Swimming: What time did you start your swim?

Courtney Moates Paulk: We started at roughly 6:45 pm at Terranea on Tuesday, October 10th and finished just before 4:00 am on Thursday morning, October 12th.

Daily News of Open Water Swimming: You are the first person to have completed two of the Triple Crown swims as doubles, do you have any future plans?

Courtney Moates Paulk: I am headed to Dover next summer. I’ve had a swim booked with Eddie Spelling for a few years now.

Daily News of Open Water Swimming: Are you prepared to swim more than 24 hours in the English Channel?

Courtney Moates Paulk: Absolutely! I’ve got a new benchmark of 33 hours and 13 minutes. I still felt pretty good 24 hours into Catalina. Here’s hoping for many more 24+ hour swims – although I’m not sure my husband Matt agrees. 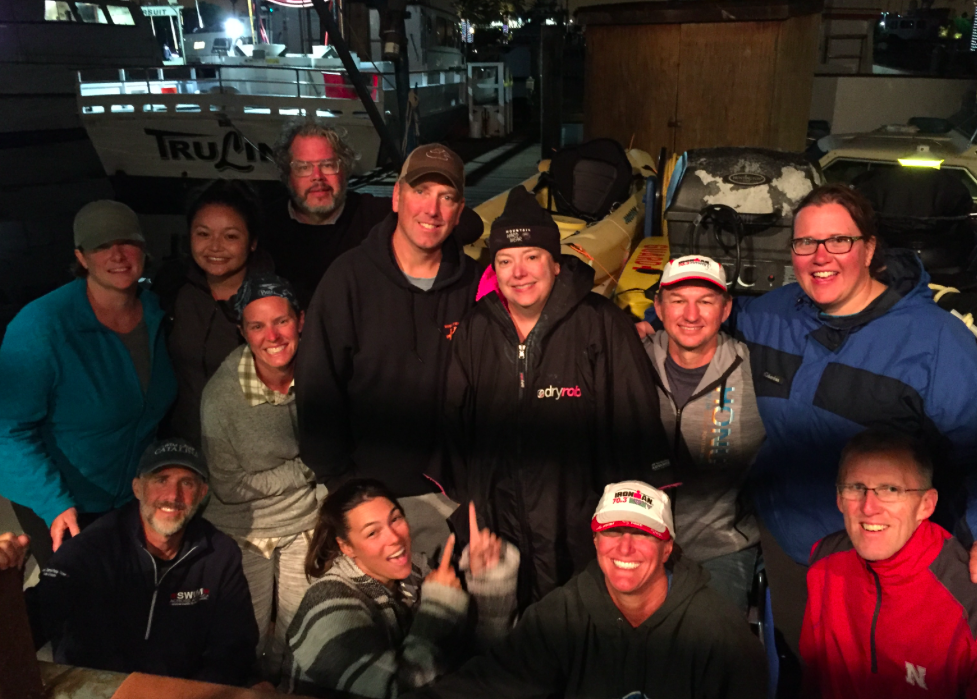