Craig Coombs And Danielle Ruymaker Rolling With The Tides 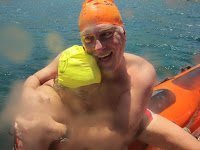 Craig Coombs, president of his own medical device consulting company, got the open water swimming bug and it is not going away soon.

After conquering the 9.3-mile (15 km) Pailolo Channel from Maui to Molokai in February and Kalohi Channel between Molokai and Lanai, he decided to turn his attention to Europe and the Strait of Gibraltar.

Together with South End Rowing Club members Andrew McLaughlin, Dan Nadaner, and Danielle Ruymaker, Coombs started in 64°F (18°C) water and swam to a rocky point on the south side of the Tarifa military installation on the Spanish side of the strait.

“The seas were relatively calm. The four of us were swimming at a comfortable pace, but the crew seemed anxious. At each feeding, they told us not to feed too long although we were taking only a minute. They kept yelling Go! Go! Go! like we had forgotten what we were doing.”

“We thought a ship was bearing down on us,” explained the South End Rowing Club member. “Towards the end of that time, we saw a ship pass behind us. What we didn’t know is that the shipping traffic had been diverted around us.”

But there was another reason for their urgency – the currents shifted and the quartet found themselves swimming into a 2-knot currents. For 30 minutes, they made no forward (southerly) progress and were moving eastward towards Egypt, a far cry and several countries off-course from their intended finish in Morocco.

The sprint to lose no more ground left the group gassed. At 3 hours, McLaughlin pulled himself onboard and at 4 hours, Nadaner was spent fighting his asthma more than the currents. “I was seriously demoralized. Danielle and I were both tiring as the fifth hour approached. It was relentless hammering at the hardest pace I had ever maintained towards a goal that seemed to be moving away.”

In a realm that both successful and unsuccessful open water swimmers know well, heated conversations started to take place within. “I told myself I wouldn’t quit, but several times I wished that the crew would cancel the swim. I didn’t know that they had been close to stopping the swim since the second hour.”

But as is often the case, help comes from various sources. “Only the intervention of the guys on the boat saved the swim. They had repeatedly begged the captain to let us keep swimming until the last possible landing spot was impossible. Repeatedly the captain only gave us another 10 minutes to show some progress, and then he relented. Danielle and I kept seeing landmarks move off to our right, and wondered if we could hit the broad side of a continent.”

They kept on punching through the increasingly lumpy seas, listening to the internal debate: give up or carry on.

The sight of windows in buildings on the coast provided the last boost of adrenalin that the duo needed. “We gave up on our feedings since we knew we could be done in another 15–20 minutes and did the best we could to power on. An hour later we were approaching a beach full of sunbathers. About 50 yards from the beach, the Zodiac redirected us over to a rocky landing spot where we crawled up some rocks in Morocco.”

Back on board the escort boat, Ruymaker muttered about their 6 hour 40 minute adventure, “That was harder than childbirth.”

Later, Coombs learned that he was sent to the rocks because the the Moroccan police were waiting on the beach to potentially arrest the swimmers for illegal immigration. Since we were only a few kilometers west of the Spanish colony of Ceuta, the captain called the Spanish Coast Guard for protection against any water pursuit by the Moroccan authorities.

The team returned via ferry from the nearby Spanish port of Ceuta because of the adverse currents. When asked by immigration how they landed on Ceuta, Ruymaker said, “Craig and I swam here from Tarifa, and the others followed us on a boat.” The officer stared in disbelief and repeated the question. Ruymaker repeated her explanation with more emphatic body language. The officer rolled her eyes as she returned their passports.