Craig Dietz Is 2016 NEKOWSA Swimmer of the Year 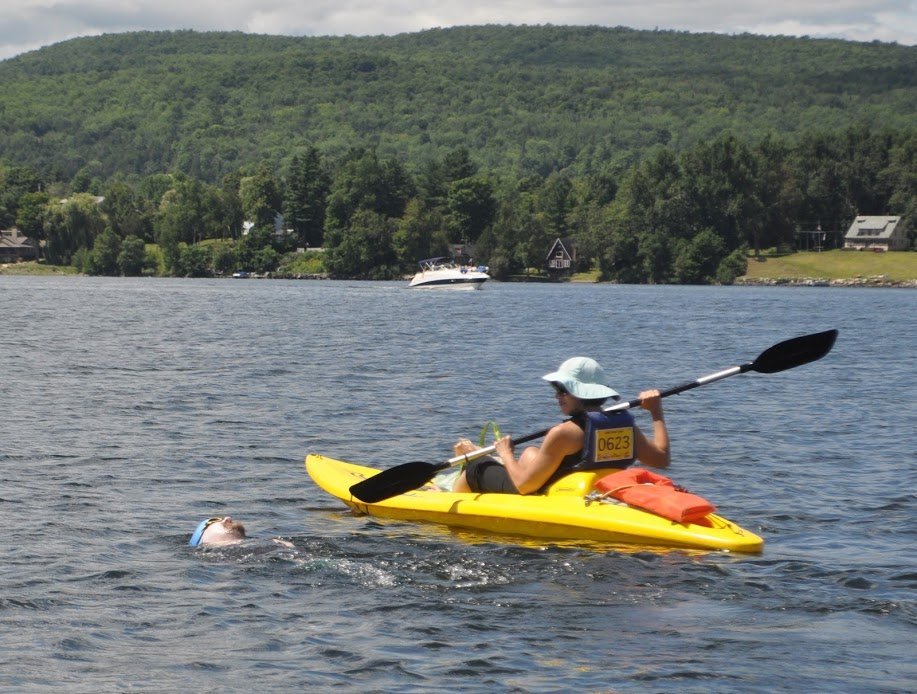 When you organize dozens of events, you have the opportunity to meet hundreds of inspirational individuals of all ages and abilities.

That is the position that Phil White finds himself year after year as the Director of the Kingdom Games and the Northeast Kingdom Open Water Swimming Association.

2016 was a fantastic repeat of the illustrious past.

White explains, “As we round the turn from 2016 and head into 2017, it’s that time of year to look back on another glorious summer of swimming and select our Northeast Kingdom Open Water Swimming Association Swimmer of the Year. We are blessed with a tribe of outrageously inspirational swimmers and their accomplishments to choose from. It brings smiles to our faces just to contemplate some of these swimmers and walk through this list.” 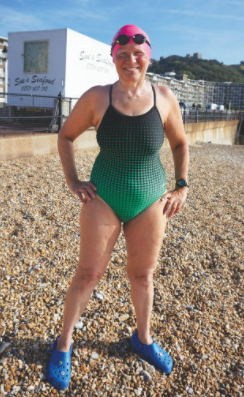 “I first met Paula in a wetsuit swimming the 5-mile length of Lake Willoughby in 2010. In 2013 when she emerged from the 10-mile Kingdom Swim without a wetsuit, I knew she was on her way.

For ditching her wetsuit and going long, she became our very first NEKOWSA Swimmer of the Year.

The next year, she became the oldest person to swim the length of Lake Memphremagog In Search of Memphre. This year, Paula became the oldest American woman to swim the English Channel [in 16 hours 4 minutes]. We think her many ‘dips’ in the magical waters of Mighty Memphremagog may be part of the explanation for her success, but the Clint Eastwood look on her face when she exited the water in 2013 says a lot about her quiet, but fierce, determination and her joy of the swim
.” 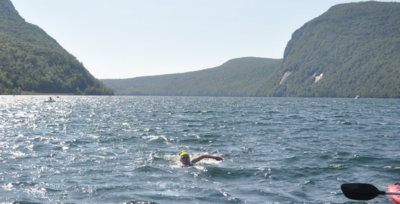 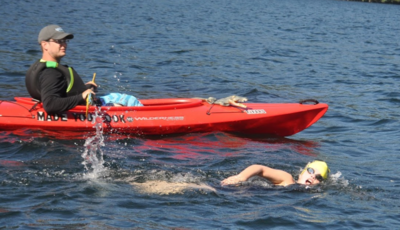 “This year, as a 12-year-old, Vera became the second youngest swimmer to complete the 10-mile Kingdom Swim in a remarkable time of 5 hours 5 minutes. In 2017, she’s signed up for the 25 km Border Buster. It was just two years ago that Vera swam her first mile with us and then took on some frisky conditions at Caspian’s three-mile distance and was named one of two NEKOWSA Swimmers of the Year in 2014.

Vera’s younger sister Margaret is hot on her heals. In 2015 Margaret started her own journey with a 1-mile Kingdom Swim and then the 3-mile Caspian Lake Swim. This year, Margaret stepped it up with a 4-mile Son of a Swim, a 10 km Kingdom Swim, a 5-mile Crystal swim, a 3-mile Caspian Swim, and a 5-mile Willoughby Swim becoming the youngest person to swim across Lake Willoughby
.”

“Theresa has been a 3-mile wetsuit swimmer at Kingdom Swim ever since our inaugural year in 2009. Her mom, kayaking for her, prepared a video of that first year, ending with the back of Theresa’s T-Shirt with our battle cry, No Lanes No Lines No Limits.

I had Theresa on my list of regularly returning 3-milers, happy with the distance and, year-after-year, cheerfully joining our annual celebration of swimming in the open waters of Lake Memphremagog Like lifer Laura Malieswki and many other Kingdom Swim regulars, she had her distance. She loved her distance. I thought she would stick with that distance as long as we offered it. But this year, something changed.

Theresa turned 50. She took off her wetsuit and swam 10 km. In 2017 she’s already signed up for the 10-mile course. It’s looking like Theresa has been inspired to take on The Stretch and explore the width of her wings. Whether a regular 3-miler or an ultra-marathoner, Theresa represents the best in the Tribe

“There’s something about the fun-filled, creemee-eating, and adventurous Kiwi Charlotte Brynn. She turned 50 this year. Her open water journey is jaw-dropping. Executive Director at The Swimming Hole in Stowe, she showed up for our very first Kingdom Swim in 2009, signed in for the 3-mile wetsuit division. Jen Kimmich of Alchemist and Heddy Topper fame, was one of the high fundraisers for our recreation center that year and won a slot in Ned Denison’s Cork Distance Swim Week. She gave the slot to Charlotte. And the journey began in earnest.

Charlotte returned in 2010 for the 10-mile swim sans wetsuit. She won the inaugural Lake Willoughby Swim and in 2011 was one of 4 out of ten swimmers to complete the 25-mile, international swim In Search of Memphre. In doing so she battled fierce headwinds all night long and experienced a tactile encounter of some kind with our lake creature. Charlotte turned to the “world stage” and took on the English Channel, MIMS, and Catalina. First time through, for a variety of reasons (hypothermia, bad tide timing, and shark bite/hypothermia) she failed to complete any one of the three. But, she came right back at them. Eating her daily creemees to help gain weight, with a smile on her face, she knocked down two of the three, but this time around suffered from severe nausea mid-way through her English Channel attempt.

In 2016, Charlotte quietly went back at the English Channel. What was a true joy to behold, she did not approach her training regimen with grim determination, but rather with a joyful exuberance in the journey. With Cynthia Needham at her side, along with her pet skeleton Uriah Skinner and parrot Percy, she swam 18 miles (28.9 km) from the City Dock in Newport to Skinner Island and Smugglers Cave and back. She swam 16 miles (25.7 km) to and around Île Ronde and back (16 miles). She swam 15 miles (24.9 km) from Georgeville to Newport. She blistered her way through the 25 km Border Buster winning with an impressive time of 7 hours 55 minutes, leaving other experienced, speedy-quick swimmers in her wake. After some more training off the coast of Maine, she was ready as ready can be. But, in the end, a fluke ingestion of salt water with just a mile or two to go, cut short her third English Channel attempt. It is Charlotte’s ‘Joy in the Journe’ which filled our summer with some incredibly fun and inspiring days

“We got to know the two-timing double-crosser Sarah in 2013. She had signed on for The Search because she was attracted to the idea of seeking out our lake creature, Memphre, in an expedition with other Swimmer Scouts. But, her summer caught fire when she double-crossed Lake Tahoe in 44 high-altitude miles with her swim buddy Craig Lenning and then, on the slightest of suggestions, decided to attempt a 50-mile double-cross of Lake Memphremagog.

She started her swim in the face of 25 to 30 mph winds which continued for the first 8 hours. With her husband, Ryan Willis as pilot and Bill Shipp as her crew, she completed the 50 miles in 30 hours. Last year, along with Elaine Kornbau Howley and Craig Lenning, she took on Loch Ness, with its 22 miles of fresh water and intimidating temperatures in the mid50°F’s, most of the way. All three completed. All three joined the ranks of only about 15 swimmers to ever swim the length of the loch, and the three are now the first to complete the Triple Crown of Lake Monster Swims: Tahoe, Memphremagog and Loch Ness.

This year, she blew the top off. We were thrilled and proud to see this Swimmer Scout swim the 82-mile length of Lake Powell in just about 50 hours and walk up the boat ramp and still have the ability to raise her arms high in celebration. Stuff of legends that girl, stuff of legends

“This year, the 2016 NEKOWSA Swimmer of the Year belongs to Craig Dietz aka The Limbless Waterman ,as he swam his very first marathon distance at Kingdom Swim. Craig was born without arms or legs. He uses a small fin attached to his left leg stump and undulates on his back.

We first heard Craig speak in 2012 at the World Open Water Swimming Association Global Conference on the Queen Mary in Long Beach, California. He swims and lives with a joy in the blessings of the life he has been given to live. His message is compelling; we are defined not by the challenges we face, but by how we face our challenges. He has often said that if a genie were to appear out of a bottle and grant him one wish – with a condition that should he wish to be born again with fully functioning arms and legs, it would be granted, but he would have no memory of his life of 42 years – he would not take that wish.

This year he took on the longest open water swim of his life and his first ever marathon distance, the 10 km course at Kingdom Swim. With Newport City Manager and escort kayaker Laura Dolgin, at his side he completed it with a time of 4 hours 12 minutes. In doing so, he joined the ranks of marathon open water swimmers.

He was nervous about this challenge. It was undertaken not without some bit of fear and uncertainty. Demons of Doubt almost caused him to drop to the 3 km distance. But Lake Memphremagog laid down her defenses and offered smooth waters for this swim and Craig leaned into his decision to go for it. Quietly talking though his decision with him at the start and watching him complete this swim, was one of those great moments of my life. I am very proud to be part of your journey, Craig, the NEKOWSA Swimmer of the Year in 2016.

Gotta love The Tribe of open water swimmers who have found their way to the legendary lakes of the Northeast Kingdom of Vermont. Many great good spirits. This summer as in previous summers, we have been blessed with the best, with many more already on their way in 2017