In Search of Memphre is a 40.2 km (25-mile) cross-border marathon swim across Lake Memphremagog.

Phil White started the event on the 10th anniversary of 9/11 in order to promote a more open border with our Canadian friends, to search for the legendary cryptozoological creature, Memphré, and to do some good along the way.

White explains, “They are joined by 26 others in support of the swim, serving as escort and patrol boat pilots, crew, and ground personnel. They will depart at 5:00 am on July 18th and are expected to cross the border into Canada between 7 am and 8 am. Border crossing has been facilitated by Canadian law enforcement which has reviewed the roster of participants and pre-approved the crossing. United States Border officials have also been extremely helpful in facilitating crossings.

The 16-foot aluminum escort boats with caged propellers are rented from TriMemphre in Magog, Québec, Canada. Swimmers and crew will be shuttled back to Newport by Jay Peak which has supported this swim for many years. The City of Magog has been most gracious, arranging for use of the beach at Parc de le Baie de Magog for our landing and the docking of our boats overnight after the swim. The support of Community National Bank and RDI also helped to make this swim possible.

If successful, Rivard would be the youngest to swim the length of the lake and Shub would be the oldest. In 2018, we have at least 60 swimmers undertaking swims of various distances – from 10 km to 25 miles – that involve crossing the U.S. and Canadian border.”

This year’s class of Swimmer Scouts have dedicated their swims to the Asylum Seekers and are encouraging donations to the Asylum Seeker Advocacy Project. Several of the swimmers, their support, and their families come from backgrounds of seeking asylum in the United States from horrific and dangerous conditions in their nations of origin.

The swim is organized and supported by Kingdom Games which now hosts over 25 days of running, biking, swimming, and ice skating in the Northeast Kingdom of Vermont and the Eastern Townships of Quebec. For more information, visit www.kingdomgames.co or contact Phil White at [email protected] 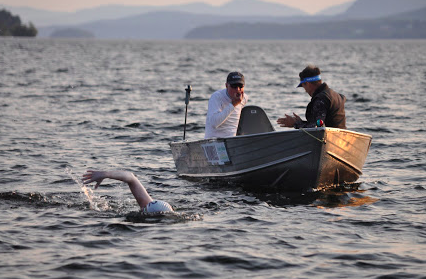