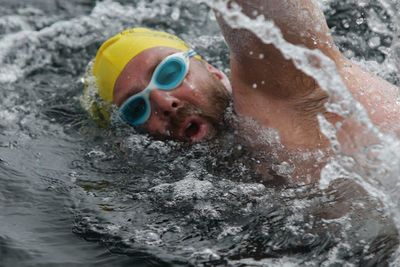 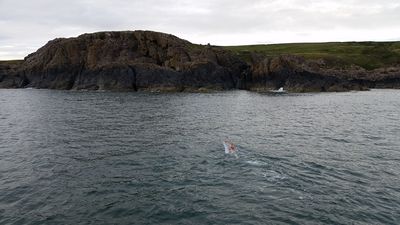 Ever since Mercedes Gleitze attempted seven times to swim between Northern Ireland and Scotland in the late 1920s, the North Channel has been considered to present the world’s most difficult, challenging and cruelest channel crossing.

For subsequent generations of open water swimmers from around the globe, the 21-mile North Channel has steadfastly retained and reinforced its reputation as a most difficult goal for even the most hardened swimmers.

Nearly 20 years after Gleitze initially made the attempt, the first successful crossing was completed in 1947 by Tom Blower. Nuala Moore explains, “The North Channel is a body of water that requires the utmost of respect.

Above both Scotland and Ireland, there are thousands of miles of sea, all raging and wanting to run south and north. When this water tries to squeeze between the two countries, the limited space forces the water to act very erratically. As the water runs through islands and in and out of headlands and bays, it goes every direction. Therefore, to a swimmer, there is no definite system of movement.

The air temperature in the summer in the north is often 12-18°C – so this would be a negative on the skin as well. The tides running through Rathlin Island work on nine hours and not the usual six. The erratic nature of these flows is why this stretch of water is the most respected. Add to this the fact that the water temperature is only 12-13°C (upper 50°Fs) and jellyfish are a huge variable. Stings are definite.”

The Irish Long Distance Swimming Association and Swim Ireland will honor the successful solo swimmers of the North Channel during the 2016 season at its annual awards 2017 ceremony at Belfast Castle in conjunction with Belfast City Council on February 11th.