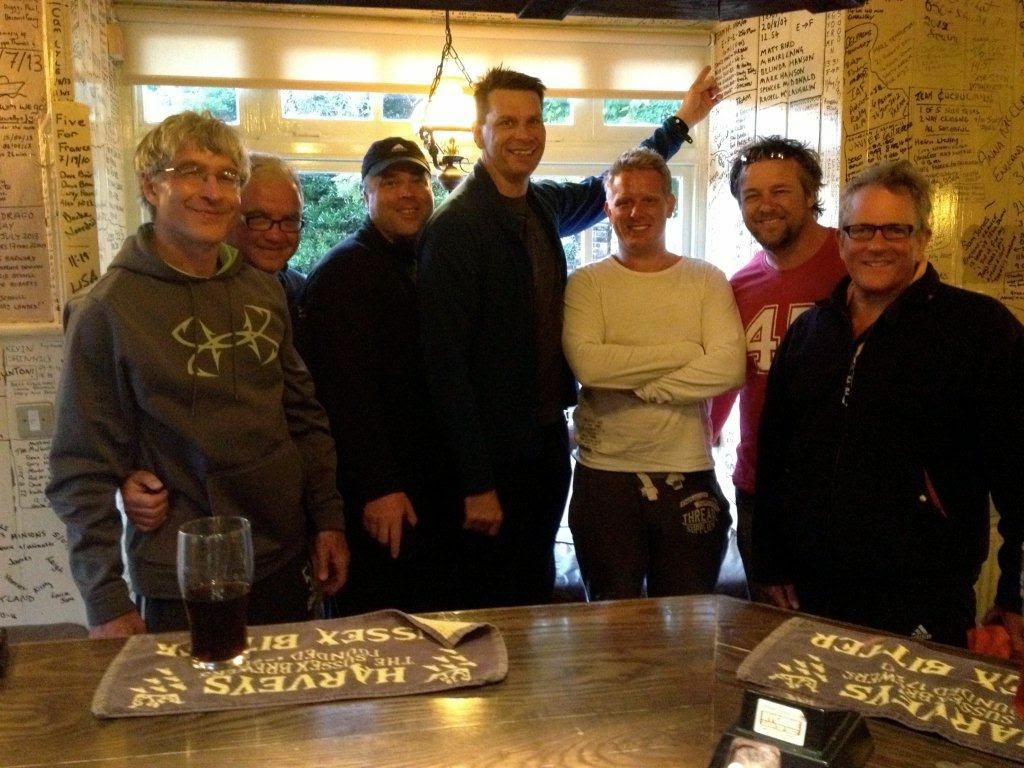 “In grateful memory of those who won a victory for freedom on D-Day 1944, the Overlord 70 relay swim team crossed the Channel from England to France today in 12 hours and 8 minutes. May God bless those to whom we all owe so much,” from Sea Satin off the coast of France on June 8th.

The Overlord 70 relay team of six swimmers completed the first swim crossing of the English Channel this season. The purpose of the swim was to honor the courage and sacrifice of those who fought in the D-Day invasion of June 1944.

The swim got underway at 4:00 a.m. from Shakespeare Beach, just west of the Dover Harbor. The water was expectedly chilly (13.9-15ºC or 57-59ºF), but the skies were generally clear and the sea remained calm throughout the swim. The sunrise was beautiful that was punctuated with a rainbow that spanned the Channel together with a light early morning shower. “A day such as is seldom seen,” said Kevin Murphy, the official Observer from the Channel Swimming & Piloting Federation.

The pilot boat Sea Satin accompanied the Overlord 70 team, skippered by Lance Oram. The team was treated to the wafting smell of bacon and sausages as the crew prepared its own breakfast at mid-morning. In a throwback in time, disco music was added to their repertoire as the day progressed. In place of the expected jellyfish along the way, the team enjoyed the company of a seal and a porpoise near the middle of the Channel along with some seaweed and organic debris in the Separation Zone.

Under the watchful eye and booming voice of Murphy, the changeovers were dramatically staged. “Ten minutes.” “Five minutes.” “One minute.” “30 seconds.” “15 seconds,” announced Murphy prior to each new swimmer’s entry for their one-hour leg. At “zero”, the horn blew and the next swimmer overtook the previous swimmer in the water. Warm clothes, refreshments and a well-deserved nap awaited each sleep-deprived swimmer as he emerged from the coolish waters.

In their radio communications as the team entered French territorial waters, the French authorities asked the pilot, “Please tell the Overlord 70 team that we wish them well.” Reminiscent of the sentiment with which the liberation forces were greeted in June 1944, the team was especially reverent of the historic significance of D-Day and respectful of those individuals who came ashore 70 years earlier with an uncommon sense of selflessness, courage and fortitude.

The team reached the French shore near Wissant in late afternoon, a little over 12 hours after setting off, making their own history.

Historical footnote: Operation Overlord was the code name for the Battle of Normandy, the Allied operation that launched the successful invasion of German-occupied western Europe during World War II. The operation commenced on June 6th 1944 with the Normandy landings (Operation Neptune, commonly known as D-Day). A 1,200-plane airborne assault preceded an amphibious assault involving more than 5,000 vessels. Nearly 160,000 troops crossed the English Channel on June 6th, and more than three million allied troops were in France by the end of August.