Dale Petranech, A Lifetime Of Achievement 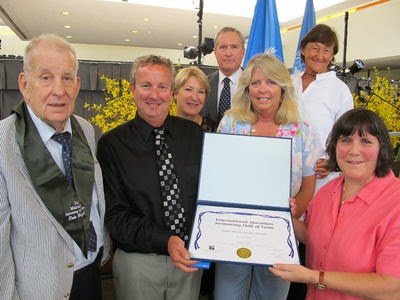 “Dale is the epitome of selfless devotion to the sport and its athletes. He is a unique long-time volunteer, donor and administrator.

He goes about his business and his support of the sport without any expectation or personal need of gain or glory. And people instinctively know and sense his innate goodness and deep-felt passion for swimming whether his time to spent at the novice level or at the professional level.”

The open water swimmer and masters swimmer will presented with his award at special ceremonies in Milwaukee, Wisconsin on April 25th. As the university proclaimed, “His definition of success, however, is not about his own accomplishments.”

“I feel that my being an honoree in the International Swimming Hall of Fame was a key factor in my selection,” explains Petranech. “I always considered myself as an administrator as opposed to leader. I would rather see others succeed than myself.”

Petranech may have ended his athletic career as a marathon swimmer, but he ran cross country and track at Marquette University. But he hung up his track shoes for a swimsuit and goggles and was destined to make waves in an entirely different sport. He has been an influential voice in the world of open water and marathon swimming for nearly 40 years, ever since he was named the first chairman of the United States Swimming’s Open Water Swimming Committee in 1977.

Petranech helped the sport of open water swimming grow as an administrator. Back in the previous century when 50 years old was considered antique by athletic standards, he became the oldest swimmer to cross the Catalina Channel at the age of 50 in 1985. Last year, he was well-deservedly inducted into the International Swimming Hall of Fame in September 2014 that followed an earlier recognition by the International Marathon Swimming Hall of Fame as an Honor Administrator in 1995.

“His historical records and recollections of the sport are priceless,” explains Munatones. “He has an encyclopedic knowledge of what happened by whom when and where regarding open water swimming on various levels since 1977. His work has spanned everything from U.S. Masters Swimming and USA Swimming to FINA and the International Marathon Swimming Association.”

A former member of the Marine Corps, Petranech went on to serve on Red Cross projects in Vietnam where he spend most of his career as a Red Cross disaster worker. He was involved in several national and international assignments with primary experience in mass care, supply and as a government and volunteer agency liaison.

The New Jersey resident remains involved with Marquette University through his support of the James M. Allen Endowed Athletic Scholarship. He considers his formative years at Marquette a critical part of the success he has enjoyed in life. “They were paramount. The background material in the various philosophy courses and examples demonstrated by the entire Marquett staff was inspirational and they established themselves as role models for me to emulate.“

Petranech’s photo above with representatives of the Catalina Channel Swimming Federation at the United Nations is typical. He is never alone and his efforts are never about himself.

Bruce Wigo of the International Swimming Hall of Fame summarizes his accomplishments, “For the past 35 years, Dale has been a leader in, and advocate for, open water, long distance swimming and has worked to organize open water swimming competitions in the United States and around the world. He accepts every challenge head-on and is well respected internationally for his work. He began in 1977, as a chairman for AAU National Long Distance Committee, of which only one race existed annually – the 4-mile for men and 3-mile for women, both swum around a quarter mile cable stretched in the water.

As committee chair, his first priority was to increase the number of meets attended by U.S. athletes, both nationally and internationally, whereby he secured U.S. athletes to compete at Lake Windermere, the first time any swimmers officially represented the USA overseas. With the help International Swimming Hall of Famer Ross Wales, Dale helped create United States Open Water Inc., when the AAU was required to relinquish its administrative control on the sport, opening the potential to access more concentrated efforts on long distance swimming’s behalf within the U.S.

For a short period of time, the organization was separate from all other organizations. As Chairman of the committee, Dale was responsible for both United States Swimming and U.S. Masters Swimming open water, long distance swimming. As a member of the DC Masters Swimming Club, Dale organized and participated in the first-ever, one-hour swimming-for-distance postal meet where results are sent to a central location for tabulation. This new concept has grown to include thousands of participating swimmers today. In 1992, with Dale’s urging, FINA President Bob Helmick agreed to study adding open water swimming to the Olympic program. Dale became Chairman of a newly appointed FINA Commission to study adding Open Water Swimming to the FINA and Olympic Games programs and to develop rules and procedures to help make it happen.

This led to the formation of the FINA Technical Open Water Swimming Committee with Dale serving as Honorary Secretary, responsible for setting the agenda. During his terms on the Committee and FINA Commission, he helped write the accepted and standard international rules using the 25 km race as a standard distance. Guidelines were taken from the rules of the British Long Distance Swimming Association, Channel Swimming Association and United States Swimming Long Distance groups. He stressed a 25 km race be held at each World Championship (first one in Perth in 1990) and pushed for a FINA Marathon World Cup in Olympic years, the first one from Lausanne to Evian France on Lake Geneva in 1988. In 1984, he helped to host a Catalina Channel International Race and a 15 km Huntington Beach to Seal Beach attended by Great Britain, Czechoslovakia, Egypt and the USA.

During his tenure as Honorary Secretary of the FINA Technical Open Water Swimming Committee, he served in many capacities internationally as an event official from Clerk of Course to Assistant Referee to FINA Special Observer. He has presided over many FINA Open Water Clinics, and has been the lead official at the USA National Open Water Championships and the 2000 FINA World Open Water Championships in Hawaii. He served on the organizing committees for the first few Manhattan Island Marathon Swims and the FINA Around Absecon Island (Atlantic City) swims.

From 1994 to 1996, Dale was the Chairman of the National Aquatic Coalition, an organization to bring together all organizations relating to aquatics, for mutual understanding. As secretary of the International Marathon Swimming Hall of Fame when Commander Gerald Forsberg died in 1998, Dale assumed his position as Honorary Secretary of International Marathon Swimming Hall of Fame where has admirably performed all the duties of this position including formalizing the ballot for the IMSHOF Induction. He developed and organized the first IMSHOF Induction Ceremony for this organization that began in 1963.

In 1985 at the age of 50 he became the oldest person to swim the 20-mile Catalina Channel. In order to preserve marathon swimming history, Dale is working to publish the personal files of World Professional Marathon Swimming Association administrator, now deceased, Joe Grossman.”

Dale Petranech is shown above with members of the Catalina Channel Swimming Federation at the 2011 International Marathon Swimming Hall of Fame induction ceremonies at the United Nations in New York City together with Penny Dean, John York, Linda Bamford, Paula Selby, David Clark and Carol Sing. Photo by Skip Storch.