Damián Blaum Rising To The Top, But Not Alone

Luciano Cotena, the president of the Martona del Golfo Capri-Napoli, clarified the date of the 2014 professional marathon swim. The FINA Open Water Swimming Grand Prix race will be held either at end of June, the beginning of July or on September 6th.

Maratona del Golfo Capri-Napoli began in 1954 and starts on the island of Capri and finishes 36 km on Marina Grande Beach in Napoli.

One of the competitors last year was Damián Blaum from Argentina, one of the most personable swimmers on the professional marathon swimming circuit. After 8 tough marathon swims when the Olympian was either too cold or too warm, too tired or too sore, he had a breakthrough year won his first FINA Open Water Swimming Grand Prix title this year. As a result, he was nominated for the World Open Water Swimming Man of the Year.

But despite jellyfish stings and jet lag, he races his friends and colleagues while competing together with his wife Esther Nunez Morena. Win or lose, his wide smile is his trademark. Fueled by a positive attitude, he certainly embodies the spirit of open water swimming and possess the sense of adventure, tenacity and perseverance that open water swimmers are known for. As he traveled between Europe and the Americas, he is always accommodating to race directors and fans and his upbeat spirit second to none. 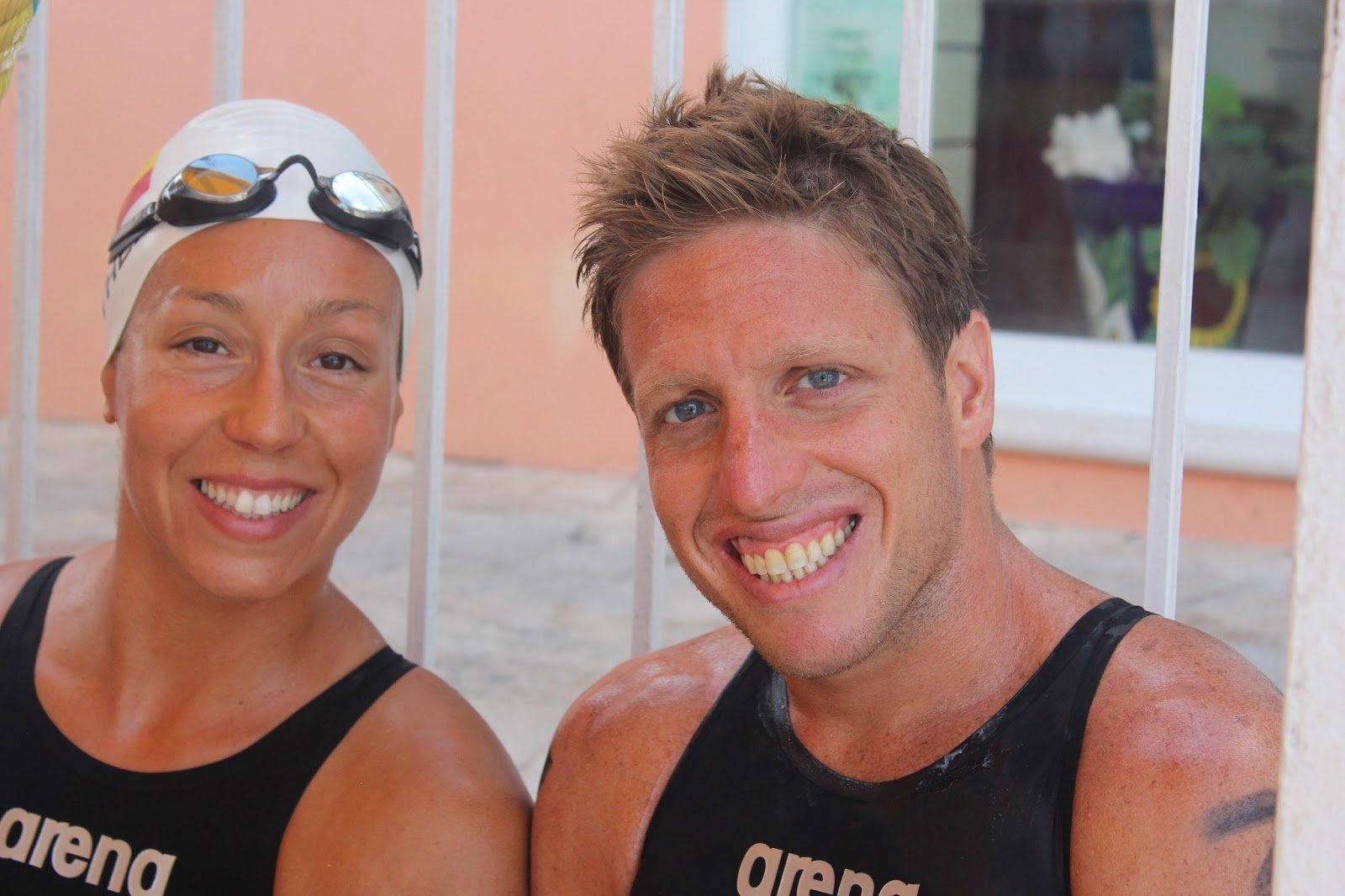 Blaum train between 80,000 and 90,000 meters per week to participate in at least 10 marathon races per year. His is a uniquely grueling, pressure-packed lifestyle where his income depends on his performance.

But Blaum is neither alone in practice or in competition.

Back in 2003, both Blaum and Esther Nuñez Morera participated in a championship event in Barcelona. Then in 2004, they both attended another professional marathon swim in Argentina.

But they had not met yet. “We did not meet at the first two races where we both swim. We did not speak together at first. It took time, more than one season. First, we became friends and, like the other athletes on the pro circuit, we spent time together. It was nice.”

But fast forward to 2010 and the pair got married. Now they train in the same pool under the same coach on the same team. And normally they do the same hard, long, grueling workouts together. “Sometimes our intervals are the same, but sometimes I finish before her. It depends on what we are doing that session.”

Their lifestyle is uncommon; their joint training is unparalleled; their racing is unique.

With two professional athletes as a married couple doing the exact same events around the world, they even swim with each other during a race in the same pack. That kind of togetherness is unique throughout the entire world of professional sports. But Blaum takes it all in stride with the cool detachment of a professional.

“In the water, this is our sport. We are very professional. Each of us tries to do our own work in the pool and open water. When we go home together, we try to not speak about swimming. But in the Grand Prix races where the men and women start together and swim in a pack together for hours, we sometimes swim together. If I can do it in a pack, I can help her in the beginning. Of course, I will allow her to draft off me. I will do it for her, but it is not easy. There are many things happening in a pack. But if she is not in the pack, she may not be having a good race, so I get worried.”

But the worries are far outnumbered by the obvious love they have for one another.

“We do normal things like a couple. I like action movies and she likes romantic movies. She is maybe more relaxed, but I always have to find something to do. I cannot just sit When we have free time, we go to the cinema or to beach. In Spain, we live 30 minutes from the beach, but we have homes in both Spain and Argentina.

She cooks very well and she is a very fast cook. We are lucky because we enjoy a Mediterranean diet with local fish, vegetables, pasta, a normal healthy diet. But when we are in Argentina, I am the manager of the barbeque,” Blaum explains with a characteristically wide smile.

But like every couple, they have their differences. “Her favorite soccer team is Rio Plate; mine is Barcelona. We take the same drink in our races, but I like bananas. She eats sports bars. She takes the window seat on the airplane, I always sit beside her. In the car, it depends. On long drives, I normally take the wheel.”

Not hand-in-hand, but certainly stroke-for-stroke.

The nominees for the World Open Water Swimming Man of the Year include: