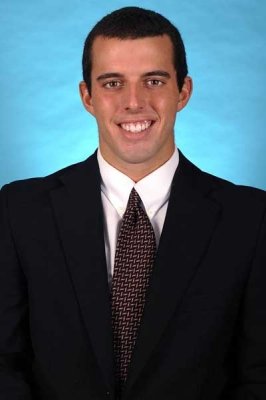 Dan O’Connor has always enjoyed long distance swimming the the pool. The University of North Carolina swimmer has recently added open water swimming to his wheelhouse.

Ashley Twichell, like O’Connor an upstate New Yorker who went to college in the state of North Carolina, interviews him on his emerging interest in open water swimming.

Twichell: What was your first open water race?
O’Connor: My first race was called Escape the Judge in Skaneateles, New York. It’s a 1-mile race with extremely clear water and a low-key, fun race. I really enjoyed this experience, and was therefore really excited to be invited to the 2010 Open Water National Select Camp. I figured open water was a new calling.

Twichell:: How did the camp go?
O’Connor: The camp was great It was at California State University Long Beach, right before 2010 USA Swimming Open Water National Championships. Even though I participated in the Skaneateles race, I was very inexperienced, and was pretty close-minded about open water. I really had no idea what to expect. I was so used to pool swimming, and the constant conditions of lane lines, clear water, and no physical contact. However, I was beyond lucky to have Fran Crippen as the camp mentor. He stayed with us throughout the entire camp, practicing with us and giving presentations, even though he also had to compete in Nationals (which were also the World Championships Trials for USA Swimming) in just a couple of days. He gave us invaluable tips that only an experienced, talented veteran could provide. So, by the end of the camp, I was really excited to compete in the 10K at Nationals.

Twichell: Tell us about the race itself.
O’Connor: It started off really well. But I was a complete rookie. The thing that stands out most in my memory is how physical it was. Right from the beginning, I was getting hit and thrown around. I was not ready for this [kind of] open water at all. Around the 5K, I was in the back of the lead pack, and giving it my all trying to stay with them. Slowly but surely, I began to feel myself dying. Not only did I lose the lead pack, but people began passing me frequently. At around 6K, I was so physically and mentally exhausted that I decided to pull out of the race. I had an internal argument with myself about whether or not to do this, but in my gut knew I could not last another four kilometers.

Twichell: As you were being brought back to shore on the boat, what was going through your mind? O’Connor: My biggest emotion was relief that I was out of the race. I didn’t have any regrets, because I knew I honestly couldn’t have swum any farther. Afterwards, though, I was disappointed that I hadn’t been able to finish, and that it certainly hadn’t gone as I had hoped or planned.

Twichell: So you were scheduled to compete in the 5K two days later. With the 10K race not going so well, what made you decide to compete, rather than just calling it quits?
O’Connor: I knew I hadn’t trained for a 10K, and knew that I had hung in there pretty well for 6 of the 10 kilometers. I had a lot more confidence going into a 5K race (one hour) as compared to a 10K race (two hours).

Twichell: How did you do in the 5K?
O’Connor: In this race, I stayed laid back for a little while. I was in the pack right behind the lead pack for most of the race, and then at the 3K, I felt a burst of energy and decided to switch gears. I passed a lot of people, and ended up finishing 11th overall, the 8th American. This was a MUCH more enjoyable experience than the 10K.

Twichell: What did you take home from the entire experience? The camps, the races, and open water in general?
O’Connor: Even though I had a really tough experience in the 10K, the much more enjoyable experience of the 5K made me walk away from the trip wanting to continue on with open water. I loved how it was so purely race-oriented, and so different from pool swimming.

Twichell: You decided to give the 10K another shot in 2011 in Ft. Lauderdale, and then again in 2012 in Ft. Myers, both at the USA Swimming National Open Water National Champinships. How did these two races go?
O’Connor: In both races, I kind of misjudged my pacing again in the 10K. I exerted too much energy in the first half of the race. However, I did finish both of these races, but not as high as I would have liked. The 5K in 2012 was the first time everything actually clicked for me in an open water race where I placed third. This race was different from the others in that I actually stayed in the middle of the lead pack for the race, and didn’t let myself stress that I wasn’t right at the front, or freak out if someone passed me. I kept reminding myself that this was an hour-long race, and I had plenty of time to make my move. If something didn’t go as I had planned, I kept repeating to myself that this was the norm for open water races.

Twichell: You are an accomplished pool swimmer; an Olympic Trial qualifier in multiple events, and an NCAA All-American honorable mention. What drives you to also compete in open water?
O’Connor: I feel like I am a lot more of a distance swimmer than the pool allows for; the farther the distance, the better I get. However, I have never gone into a 10K with a great strategy. Therefore, I know that I can be so much better than I have shown so far; this makes me want to continue trying, until I have the race I know I can.

Twichell: What are the biggest lessons you have learned from your open water experiences?
O’Connor: Knowing that I have to pace myself is definitely the biggest one. Also, to take advantage of drafting, and knowing I don’t need to be at the front of the pack, especially in the beginning. In fact, this is actually detrimental for me. Also, to not stress or worry when unexpected things happen, or something goes wrong; realizing that this is happening to everybody, and is just the nature of open water.

Twichell: What advice do you have for young swimmers who are thinking about trying an open water competition?
O’Connor: It is definitely worth it to give it a shot; for me, open water is so much more engaging and stimulating than a pool race. The majority of people I know who have given open water an honest shot have grown to love it. In addition, there is a lot of potential for mobility and moving up in the open water scene.