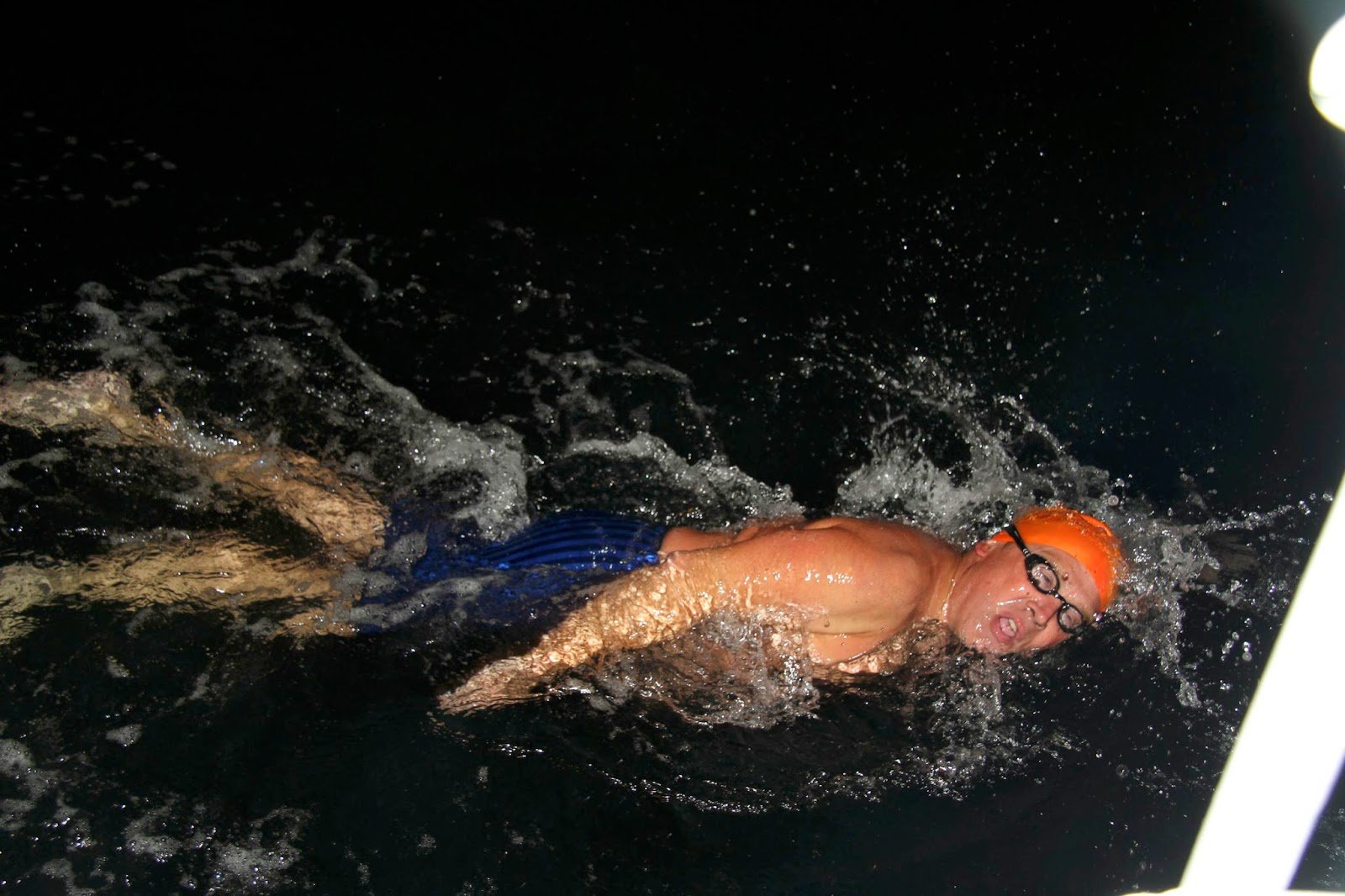 Daniel Robinson is an American open water swimmer from Seattle, Washington completed the Triple Crown of Open Water Swimming with his second Half Century Club crossing.

Robinson started off his Triple Crown campaign with a Manhattan Island Marathon Swim in 2006 and followed it up with a crossing of the Catalina Channel at the age of 51 in 9 hours 28 minutes from Catalina Island to the California mainland in 2008. He completed his Triple Crown under the escort of Michael Oram at the age of 56 years when he crossed the English Channel in 11 hours 59 minutes this July.

Robinson tells of his adventure in the English Channel first-hand, “Sunday morning, as my wife and kids were figuring out where to go sightseeing, I got a message to call Mike Oram, my pilot. I called Mike. He advised me that I should go Sunday afternoon instead of Monday morning, because the weather looked better from 4 pm to 4 am than after 4 am Monday. When he asked if I wanted to go in the afternoon, I said yes and suddenly two and half years of preparations came down to 5 hours to go. We were at the dock at 3 pm and at 4 pm I jumped into the water and swam out to Shakespeare Beach. I began my swim with started 40 years earlier as a teenage belief that I could swim the English Channel and from a conversation with Scott Lautman 11 years earlier that I was not too old to make the swim.

The swim started. There wasn’t a lot of chop, but enough that it made breathing difficult and my low left arm recovery was hitting the water. At 2 hours into the swim, my throat ached, my back was aching and my left shoulder was hurting. At that point, I wondered if I could keep going for another 10-12 hours. I never mentioned this to my crew, wife and kids, or Mike. I decided it would be too embarrassing to stop after 2 or 3 hours. I decided to just swim from feeding to feeding and hope it gets better. Mike was correct about the weather and the water calmed down. After 3 or 4 hours, I was able to swim my normal stroke and get into a rhythm.

About the middle of the channel, we ran into some jellyfish and I was stung a couple of times. The stings actually distracted me from my other aches and pains and were not a problem.

Sunset came and the sun dropped below the clouds and was a red ball to the north. At this point, my body was in autopilot and I kept swimming to the next feeding. When it got dark, Mike turned a spot light on me and at first it was irritating and blinding. After a while, it became my friend and the light became my connection to the boat. In the night, we saw the lights of 3 French cities, ferry boats and cruise ships. The city lights gave me the feeling that I could finish the swim. Soon we were moving away from the city light as the tide pushed me to the west. At that point, I decided to swim till dawn and I hoped I’d be done by then.

Around 2:30 to 3 am, Mike made a course correction and I knew we were close to the finish. 1 mile out, Mike told me it was a mile away and I was relieved. But it was the longest mile. I must have taken an hour to swim the last mile. When the boat stopped 100 yards in front of the beach, I veered to my left and soon I was swimming away from the beach. Mike swung the boat into my path to get my attention. He explained, I was swimming away from the beach and there was 150 yards left to swim. I was to follow the boat till it stopped 100 yards away from the beach and then follow a spot light to the beach. It was an hour and half before dawn and very dark. This time I followed the boat and the light to the beach finishing my Channel swim.

At 56 years old, Scott was right: I wasn’t too old. Completing the Triple Crown of Open Water Swimming was a byproduct of my preparation for my English Channel swim. The Manhattan Island Marathon Swim and Catalina Channel swims taught me how to train for a long swim and they gave me the confidence to swim the Channel. Scott Lautman mentored me the whole time. His friendship, guidance, long Saturday pool swims in the winter, our 3-day La Jolla Cove training weekend in April and the many Puget Sound swims in June and July prepared me for this swim. Scott’s mentoring and my wife Kathy’s support made all of these swims possible