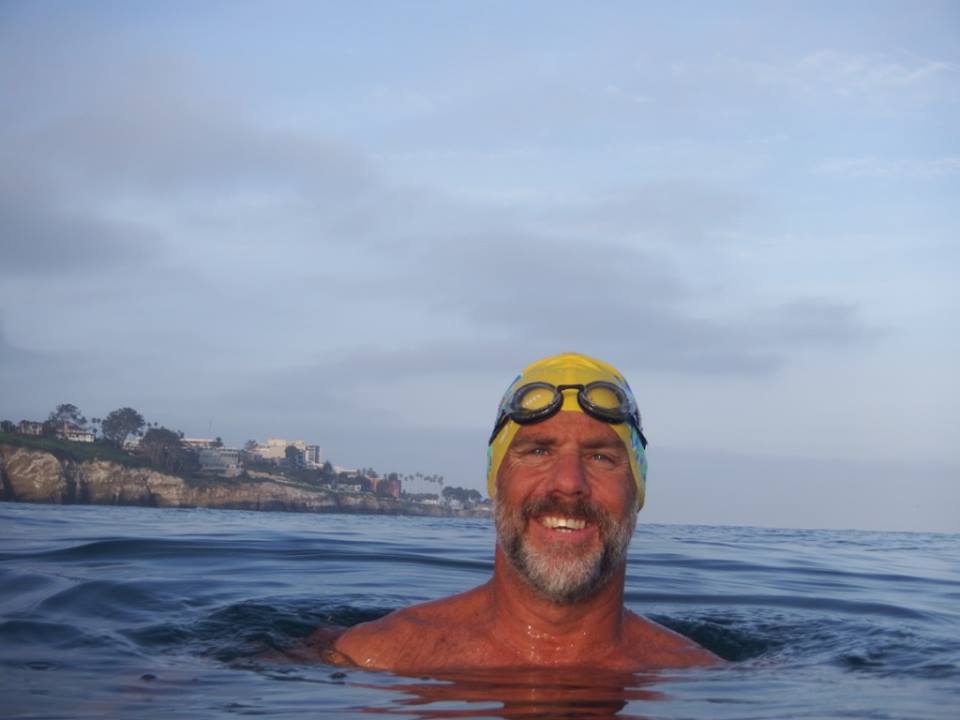 Dan Simonelli will be one of the 12 swimmers participating in the Pan-American Colibrí Swim, a 10 km cross-border swim from California to Tijuana, Mexico on May 5th.

While the other swimmers come from as far away as South Africa and Israel, Simonelli is the only local swimmer.*

He explains the course and history of open water swimming in the area:

Daily News of Open Water Swimming: You will see the Coronado Islands as you breathe to your right on the Pan-American Colibrí Swim. Not many people have swum from these islands, either to the Mexican mainland in Tijuana or to the California mainland in Point Loma. Can you explain the history about swims (solo and relays) from the Coronado Islands?

Dan Simonelli: I first learned about some swims between the northern Coronado Island and Point Loma from Bob West. Bob organized some relays among La Jolla Cove Swim Club members. Friends getting together for a fun, challenging swim. Anne Cleveland decided on one of the relays to stay in the water and swam it solo. As I recall, that route is around 15-17 miles. And it must be timed with the incoming tide otherwise you’ll get stuck off the coast going nowhere or backwards until the tide changes again.

My experience with swimming in the area of these islands was with a burgeoning event (Swim for Hope) organized by a small group of La Jolla Cove Swim Club members, led by our good friend and swimmer, Father Brian. He started a fundraising swim event a few years ago to support a boys orphanage in Baja Malibu, Mexico called St. Innocent Orphanage with which his church has a working and personal relationship. I’ve participated in the events in which the swim consists of a 9-10 mile distance from the South Coronado Island to the Baja Malibu Beach. It’s a beautiful area to swim in: clear, deep blue water. It reminds me very much of Catalina Channel.

Dan Simonelli: The border area in which the Pan-American Colibrí Swim will take place is significantly farther north than where I’ve swum into Baja Malibu. The marine environment is very different in terms of the water quality and general lack of water clarity. While the area north of the USA-Mexican border is unique in that it includes the Tijuana Slough National Wildlife Refuge and the Tijuana River National Estuarine Research Reserve, due to the chronically contaminated Tijuana River effluent it’s not a hospitable area to swim.

Although our Pan-American Colibri swim’s primary focus is in support of the work of the Colibri Center for Human Rights, a family advocacy organization working to end migrant death and related suffering on the USA-Mexican border, certainly the ongoing issue of the polluted water which has been allowed to continue unabated for decades is an undercurrent issue on which our event will cast a spotlight and perhaps a metaphor for the dangers migrant people face and risk their lives.

Dan Simonelli: Imperial Beach is a relatively small town tucked away in the southernmost western corner of San Diego County. It is a quintessential small beach town, quiet and slow-paced, friendly and quaint. It’s a beautiful area and the people I know who live there take great pride in those qualities of their town.

Daily News of Open Water Swimming: What open water swims are held annually in the area or just north in San Diego and La Jolla?

Dan Simonelli: As part of the SuperFrog Triathlon Ironman 70.3 event, the swim portion takes place just north of Imperial Beach on the US Navy base. As a open water swim coach I’ve had several swimmers come to the area to practice and get familiar with the swim area and conditions which can be rather rough with the waves and the shore break.

North of Imperial Beach, there’s an open water swim event, Around Coronado Island, which is about a 10-mile loop. It’s a fundraising event to send military families to Camp Sunshine, a year-round one-of-a-kind retreat for children with life-threatening illnesses and their families.

To donate or volunteer for the Colibrí Center for Human Rights, visit here.