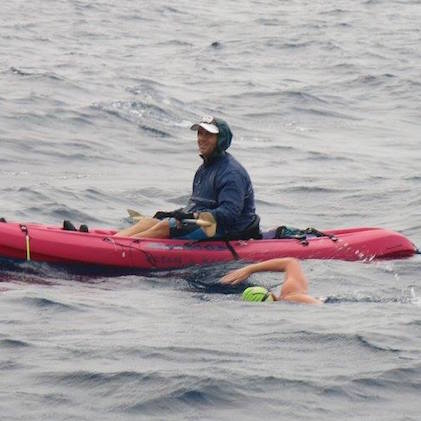 Dan Simonelli spends a lot of time on shorelines, escort boats, kayaks as well as on pool decks and swimming himself either on solo swims or relays. And he answers a lot of phone calls, texts and emails from swimmers around the world – of all ages and from all walks of life – sharing his know-how and expertise in the open water.

For his activities and accomplishments, he was honored by the Marathon Swimmers Federation with the Barra Award for Best Overall Year.

The Barra Award for Best Overall Year is named after David Barra and is awarded to the male and female marathon swimmers who are recognized for the most impressive year of marathon swimming. The Barra Award considers an individual’s full body of work in the sport, including swims, event organizing, community-building, leadership, and other contributions.

“It was as if this Barra Award was designed specifically to encompass all of Dan’s actions and responsibilities,” said Steven Munatones. “He touches nearly all aspects of the sport, from competition to charity swims, helping everyone from teenagers to older masters swimmer.”

Anthony McCarley nominated him for the Barra Award (male). “Dan started out the year early by swimming the Catalina Channel solo in January, becoming the second person to swim on that date, the 89th anniversary of the first successful crossing by George Young, winner of the Wrigley Ocean Marathon Swim, in 1927, starting the swim from the Isthmus as they had done in 1927.

Dan was also a member of the relay setting a Catalina Channel Swimming Federation record for Mixed relay (3 male, 3 female) age 50-59, going in the opposite direction from the mainland to Catalina.

He did a 16-mile swim from La Jolla Shores beach to South Mission Beach jetty and back in San Diego in August.

Dan coaches the Arch Academy Zombies (an open water swim team) who did the Alcatraz swim, Catalina Channel relays, English Channel relays, a Santa Barbara Channel Swimming Association ‘First’, the Santa Barbara Island to Anacapa Island relays. And in August, with the plan to do Ka’iwi (Molokai) Channel relays getting weathered out, he shifted the plan to a point-to-point relay swim along West coast of Molokai Island and swam with one of the two relays.

Dan did a solo English Channel crossing on August 25th and then stayed there for the next few weeks working with Chloë McCardel and supporting other swims and relays including serving as the coach and crew support for Team Manatee, Swim Across America English Channel Relay (helped raise over US$80,000 for Swim Across America), the 4SeaAbles Relay, the Channel Crusaders Relay, the Return Trippers Relay, and the La Jolla 10 Mile Relay in September, and assisted numerous solo swimmers and relays in their planning and coordination of their Catalina Channel, Anacapa Island, English Channel and other swims. He was an observer for the Catalina Channel Swimming Federation and the Santa Barbara Channel Swimming Association, a voting Member of Catalina Channel Swimming Federation Board of Directors, a member of International Marathon Swimming Hall of Fame Voting Panel, President of the La Jolla Cove Swim Club, and the Co-event director for La Jolla Pier To Cove Swim.