Dancing In The Water Premieres At Jazz Festival 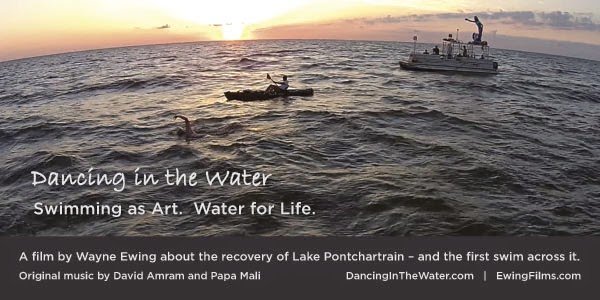 Emmy Award-winning filmmaker Wayne Ewing‘s latest film – Dancing In The Water – is set to premiere on April 29th in the midst of Jazz Fest. The screening at the classic Prytania Theatre is sponsored by the Louisiana Living History Foundation as their first film festival while also being presented by WWOZ and radio host George Ingmire who recorded the live music for the film.

According to Christopher Tidmore, Communications Director of the Louisiana Living History Foundation, the film helps to fulfill their mission to commemorate significant events in Louisiana.

Dancing in the Water follows Louisiana native Matt Moseley as he swims 25 miles non-stop across Lake Pontchartrain to publicize the cleanup of this beloved New Orleans fishery and playground. Moseley swims Mardi Gras-style as he was accompanied by musicians under a full moon.

Composer David Amram, whose work has long been associated with the beats improvises throughout the long night and is joined at dawn by legendary New Orleans blues men Papa Mali and Alfred Uganda Roberts to create a virtual Woodstock on the Water.

Along the way, the film shows what it takes to restore a beautiful body of water. Marine scientists and experts on coastal erosion from the Lake Pontchartrain Basin Foundation illustrate with their work how the Lake has recovered since Hurricane Katrina, proving the point that when left alone in the right way nature can heal itself.

April 29th at 8:00 pm at the Prytania Theatre (Premiere) and Castillo Blanco (Reception).

Filmmaker Wayne Ewing, Matt Moseley, Papa Mali, and John Lopez of the Lake Pontchartrain Basin Foundation will do a Q&A after the film. A reception and concert with Papa Mali and special guests will follow at Castillo Blanco for those who attend the premiere. Advance ticket sales here and at the Prytania Theatre starting at 7:00 pm.