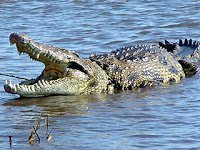 During his completion of the 5 Oceans (a solo marathon swim in each of five oceans of the world: Atlantic, Arctic, Southern, Indian and Pacific), Lewis Pugh had to study and prepare for creatures that could be of potential harm.

He came up with these Big 7 in order to potential danger.

These Big 7 are the six most dangerous creatures that could be potentially harmful to open water swimmers:

1. Polar Bear
Found in the Arctic. They look cute, but they are extremely dangerous. They are one of the few animal species that will hunt a human. They do not fear man. And when they come for you – not much will stop them. They move very quickly. The last Briton to be killed by a wild animal was killed in August by a polar bear on the Island of Spitsbergen. Four of his colleagues were badly mauled.

3. Hippopotamus
You should see them – but they kill more people in Africa than any other animal, other than the mosquito (malaria). A bite from a hippo is serious.

4. Leopard seal
Found off the Antarctic continent. They are a frightening looking animal! They have razor sharp teeth and let out a blood curdling hiss when you get near them. One moment they want to be your friend – and they will kill a penguin and drop it in front of you as a gift. The next moment they are trying to grab your leg. A research diver was attacked and killed by a leopard seal off Rothera research station in 2003.

5. Great White Shark
Found in most oceans. Obviously very dangerous. But a surprising number of people survive great white attacks. I train with a young swimmer in Cape Town who had his leg ripped off – but he survived.

6. Homo sapien
How many swimmers are hit annually by boats and jet skis and have near misses?

7. Box Jellyfish
Found especially off the Australian coast. Some species are very venomous. An sting by a box jellyfish can be fatal.

At the 2010 Global Open Water Swimming Safety Conference, there were also several other creatures that were discussed about due to potential problems that have been caused for open water swimmers around the world: orcas, sea snakes, needlefish and piranha.

There are other predators and creatures for open water swimmers to be cautious of, without a doubt.

However, humans are visitors in our marine world where its natural denizens must be respected and protected.