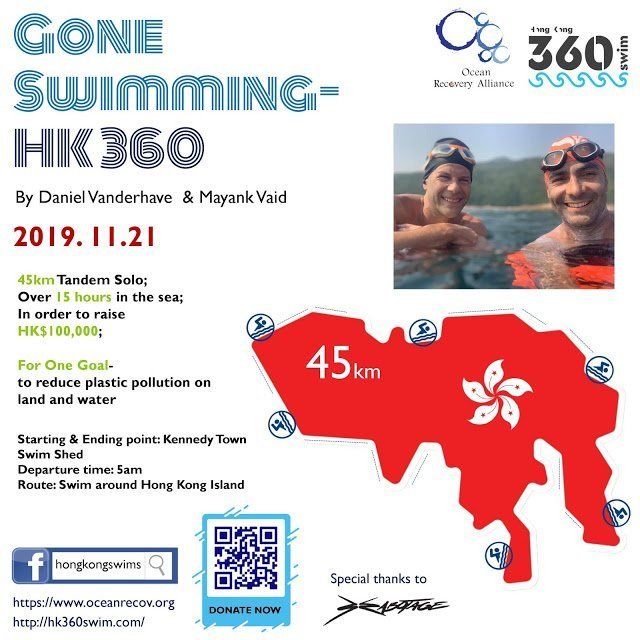 Daniel Vanderhave and Mayank Vaid will attempt a 45 km circumnavigation swim around the island of Hong Kong on November 21st.

Doug Woodring reports, “It will be a tandem swim that is expected to be 15 hours. Their goal is to reduce plastic pollution, both on land and in the water.”

The HK360 Swim is a 45km swim circumnavigation of Hong Kong Island that was conceived in 2016 by Shu Pu. Her vision for the HK360 Swim is to become recognized as the signature swim challenge for Hong Kong, similar to the English Channel for England or the 20 Bridges Swim for New York City.

Simultaneously, HK360 Swim encourages swimmers to make their effort count towards a cause through raising awareness and fundraising for charities that are most dear to them.

HK360 Swim starts near Kennedy Town at the Sai Wan Swimming Shed which opened in the 1960s and is the only swimming shed in Hong Kong still open to the public.

The inaugural HK360 Swim held in November 2017 when Simon Holliday swam around in 12 hours 34 minutes while raising over HK$1.1 million for charity. The previous record was set in 1976 by Australian Olympic swimmer Linda McGill who finished the swim in over 17 hours.

In, 2018, Edie Hu became the first woman to swim around Hong Kong Island in 12 hours 35 minutes. The 6-person Drifters relay team was the first team success in 12 hours 2 minutes.

For more information on the HK360 Swim, visit www.oceanrecov.org and HK60swim.com.

To donate to their cause, visit here.