Daring, Dreaming And Drama Across The Cook Strait 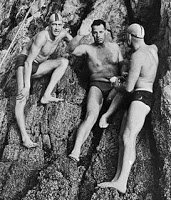 Successfully crossing any one of these channels or doing any marathon swim is an achievement to be proud of. But there is something special when an individual becomes the very first person to do a crossing. It requires a combination of daring, dreaming and drama.

The then 27-year-old Barry Devonport brought that sense of adventure to his home country of New Zealand on November 20, 1962 when he became the first person to swim across the 26K (16 nautical mile) Cook Strait between the North and South Islands in 11 hours and 20 minutes.

While he was celebrated as a national hero in New Zealand, his successful crossing really began eight months earlier when he pulled hypothermic on his first attempt that ended unceremoniously less than 2K from the finish.

Eleven hours after starting on Cape Terawhiti on the North Island, Barry finished on Wellington Head at the tip of the South Island. “Barrie was like the Edmund Hillary of swimming,” explained Philip Rush to The Dominion Post. “He was the first to do that and nobody can ever take that away from him.”

A member of the New Zealand Sports Hall of Fame and the International Marathon Swimming Hall of Fame, he is no longer with us as he passed away yesterday after a long battle with cancer at the age of 75.

The memory of the man and his feat will live long in New Zealand and marathon swimming history. 64 swimmers to date and many others over time will follow in his wake.