Darren Miller Working On A 6-Pack In The Oceans Seven 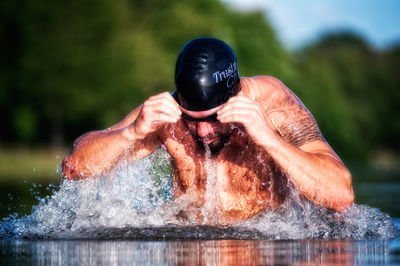 Darren Miller has completed 5 of the 7 channels in his quest to achieve the Oceans Seven. Sitting behind Penny Palfrey and Michelle Macy on the Oceans Seven global list, he is going for his sixth channel, the Cook Strait, on March 20th pending favorable weather. The Cook Strait is a 16nm (29.6 km) swim between the North and South Islands of New Zealand.

Under the guidance of Philip Rush, Miller’s swim across the Cook Strait will begin at daylight and is anticipated to last 8-10 hours in 60ºF (15ºF) waters. The Cook Strait is unique among the Oceans Seven channels in that Miller is unable to start or finish the swim on actual land, due to rock ‘walls’ on either side. In addition, this is the only swim of the Oceans Seven challenge in which participants are permitted to exit the water for up to a 10-minute period of time if sharks are spotted or approach the swimmer.

The Cook Strait can also have the deadly venomous box jellyfish, but to date 61 swimmers have successfully made 71 crossings since Barry Devonport first crossed in 1962.

“Unlike my previous 5 channels, all of my preparation had to be done at indoor pools,” explained Miller. “The lack of open water swimming opportunities in the winter has forced me to train in warm, still-water pools, making my preparation for the Cook Strait difficult.” Miller plans to arrive early in New Zealand to acclimate his body to the new water temperature and swimming conditions.

Miller is swimming to benefit and raise awareness for Team Forever and the Forever Fund, a charitable foundation he played an integral role in establishing along with Cathy Cartieri Mehl and their families. The Forever Fund”is dedicated to the memory of Mehl’s father, Anthony Frank Cartieri. This fund aids families in their struggle to afford the costs associated with infant cardiothoracic surgery that takes place in the cardiothoracic unit of UPMC Children’s Hospital of Pittsburgh. Team Forever is a recognized 501(c)(3) non-profit organization founded by Miller, which manages contributions to the Forever Fund. 100% of all donations benefit the Forever Fund as Miller is fully sponsored by Trustmont Financial Group for his swimming ventures.